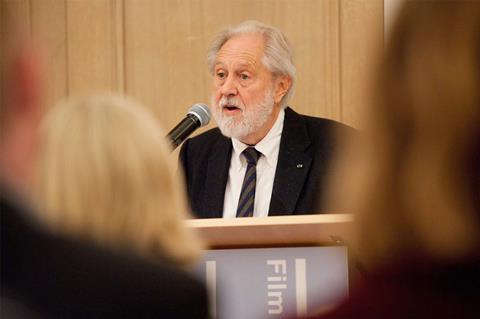 Speaking in his annual keynote address as the president of the UK’s Film Distributors’ Association (FDA), David Puttnam has warned US-based online giants such as Facebook, Apple, Amazon, Netflix and Google must take action to tackle the misuse of users’ data.

The revered UK producer of Chariots Of Fire and The Killing Fields highlighted that while the so-called FAANG group, which now accounts for 10% of the entire US stock market, have “improved our connected lives”, recent questions have emerged around the safety of private data. All of the group are either producing or moving into the production of original content.

“As has become all too apparent, data can be misused to a point at which it begins to threaten democracy itself,” Puttnam said.

The producer’s comments follow the recent scandal surrounding Facebook’s protection of its users’ privacy, which reportedly saw more than 87 million people have their data harvested by controversial firm Cambridge Analytica. The revelation led to Facebook founder Mark Zuckerberg testifying in front of the US congress this week that his company could have done more to protect privacy. The online social media giant has also accepted some responsibility for its failure to deal with Russian meddling in the 2016 US presidential election.

Puttnam added the new online players must follow traditional organisations in “accepting responsibility for what they publish”, pointing to newspapers which he said “have always assumed levels of legal responsibility for their content, whether written by journalists or readers”

Puttnam’s comments follow his call last year for filmmakers to tackle the subject of ‘fake news’.

The producer highlighted recent consolidation of the entertainment market, such as Disney’s proposed acquisition of 20th Century Fox’s entertainment assets. He said, “In the internet age, no one can be surprised that the market for content is increasingly competitive, global and dominated by a small number of media giants with remarkable firepower.”

“Whenever there’s an over-supply of content and a fragmented market, consolidation seems an entirely rational response. Not only do I believe that this trend will continue, but it’s natural that it does so,” he added.

Puttnam has held his position at the FDA for 10 years, during which time he has regularly addressed the topic of the UK’s theatrical windows.

He reiterated his opposition to traditional releasing models. “Imagine a business that, having launched a product that may have cost hundreds of millions to produce, promote and distribute, exposes it to the marketplace for, say, six weeks, then withdraws it from any form of legal consumption for a couple of months or more – that is manifestly not a business that’s maximising the interests of its customers or its shareholders. Yet that’s exactly what the UK’s theatrical window arrangements do to distributors,” he said.

“Independent films, in particular, can only lose out as a result of this hopeless lack of commercial flexibility. Cinema operators tell me they need a protracted window of exclusivity, affecting all mainstream releases, to protect their investment in real estate, otherwise cinema visits would fall. But I’ve still seen no evidence of that being the case,” Puttnam continued.

Puttnam has previously issued warnings around the potential damage that could be caused to the UK’s film sector by its forthcoming exit from the European Union. In today’s speech he praised the government’s recently announced sector deal for the creative industries, saying that it “shows us being taken seriously and our needs properly considered as Brexit approaches”.

He also picked out four key points he believes the UK must address for its post-Brexit future:

“One: A new immigration system that allows the creative industries to go on attracting the best talent in Europe – and beyond – to come and work in the UK.

Two: An agreement that enables our future trading arrangements to be as frictionless as possible, with reciprocal market access for the distribution of UK and EU member states’ film and TV productions. It must be as easy as possible for UK businesses to work with partners in the EU, and it’s imperative that the existing flexibility to license content on a territorial basis is preserved

Three: That the UK continues to be recognised as one of the best countries in the world in which to protect and enforce intellectual property rights. It’s essential that a robust IP regime enables creators to turn their ideas into revenues.

Four: Continued access to new iterations of specific EU programmes such as Erasmus Plus for student transfers, and Creative Europe which, for many years, has helped to support qualifying film companies and their audiences would, I believe, benefit the remaining EU-27 as well as ourselves.”

Finally, Puttnam also suggested the UK film industry will continue to make bigger plays into the virtual reality industry, predicting that there could be a network of VR-specific cinemas “within 10 years”.

“As new technologies redefine the very concept of a ‘screen’, the industry will increasingly need to explore fresh ways to tell stories, and to find viable new business models for the production and distribution of those stories,” he added on the subject of technological innovation.

On the same day as the FDA’s annual event, the organisation is also celebrating the launch of Screen contributor Geoffrey Macnab’s new book Stairways To Heaven: Rebuilding The British Film Industry, which is backed by the FDA and contains a foreword from Puttnam. The book explores the transformation of the UK film industry over the last 30 years.