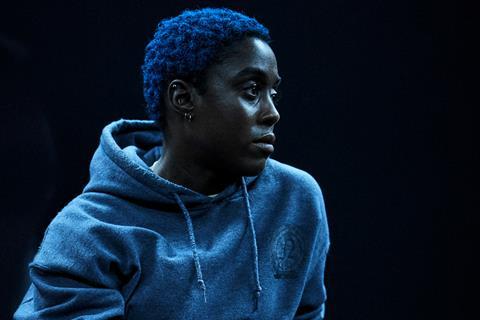 Lashana Lynch in ‘Ear For Eye’

Based on green’s 2018 stage production of the same name, the feature is backed by BBC Film and the BFI. A theatrical release with an as-yet-undisclosed distributor is planned for 2021 before being broadcast on the BBC in the first half of 2021.

The story, also written by green, follows UK and US black characters of different generations navigating their way through society. Lynch reprises her leading role from the stage production in an ensemble cast that includes Tosin Cole, Carmen Munroe, Danny Sapani, Nadine Marshall and Arinzé Kene.

Shot over five weeks at London’s Kennington Studios, Ear For Eye was produced by Fiona Lamptey for Fruit Tree Media. Lamptey was recently appointed director of UK features at Netflix.

The executive producers are Rose Garnett for BBC Film, Farhana Bhula for the BFI, Barbara Broccoli for Eon Productions and green. Broccoli was a producer of the stage play, which led to Lynch being cast as a 007 agent in the upcoming James Bond film. Lynch was previously best known for her role in superhero film Captain Marvel.