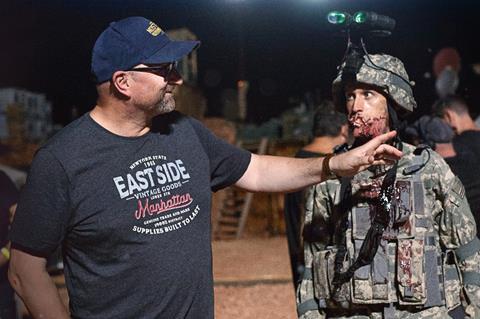 Neil Marshall on set of ‘The Lair’ in Hungary

The Lair follows Sgt. Tom Hook as he is tasked with leading a unit to find Lt. Kate Sinclair after the Royal Air Force fighter pilot was shot down in Afghanistan. Pursued by insurgents, Sinclair has sought shelter in an abandoned bunker where she unwittingly releases the Ravagers – a half human-half alien man-made biological weapon.

Hook and his team, accompanied by a handful of British SAS troops, must save Sinclair from insurgents and the Ravagers before they overrun the area and threaten the entire world.

“It’s great to be back in the thick of the action with such a stellar cast and crew, and I’m thrilled to be shooting in Budapest again,” said Marshall. “This movie really captures the mood and intensity of my early work, not to mention the blood and guts. I think horror and action fans are going to get a real kick out of The Lair. “

“We are very excited to start production on The Lair,” said Highland Film Group CEO Arianne Fraser and COO Delphine Perrier. “The project received great attention from worldwide distributors when we first introduced it [at the AFM last year].

“Neil’s previous film, The Reckoning was a solid success in the independent world, and we know he is ready to take on another great creature feature – a genre he is beloved for. The talented ensemble cast will certainly deliver for horror-action-thriller fans too looking for a dynamic story and an edge-of-your-seat experience.”