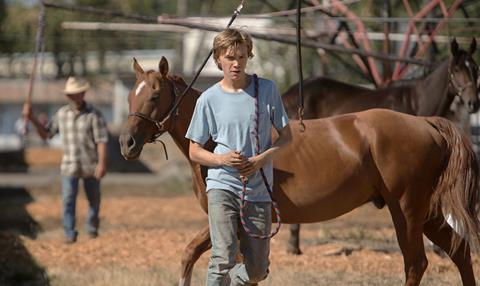 Screen can exclusively reveal the first image from Lean On Pete, the new feature from director Andrew Haigh following his critically-acclaimed drama 45 Years.

Produced by The Bureau, the picture stars Charlie Plummer in the lead role of Charley Thompson, a fifteen-year-old boy who takes a summer job with a washed-up horse trainer. There, he befriends a failing racehorse named Lean On Pete.

The film is an adaptation of Willy Vlautin’s  novel of the same name. Tristan Goligher is producing for The Bureau and the project was co-developed and funded by the BFI and Film4.

Andrew Haigh commented: “Willy’s book is unsentimental, honest, and deeply affecting. I’ve thought about Charley Thompson every day since I first read the book four years ago. I’m delighted to bring this adaptation to screen.”

As previously revealed by Screen in Cannes, distributor A24 will release the film in North America, while Curzon Artificial Eye will distribute in the UK.