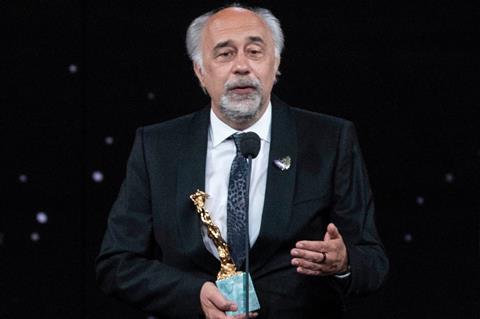 The drama, which chronicles the difficult life of Italian painter Antonio Ligabue, is produced by Palomar with Rai Cinema, and premiered at the 2020 Berlinale, where Elio Germano won the Silver Bear for best actor. The film, which was the frontrunner going into the night with 15 nominations, also picked up prizes for cinematography, hair artist and sound.

After an online 2020 edition, in which all of the nominees were awarded via video, the 66th David di Donatello ceremony returned with an in-person ceremony. Held a couple of months after its usual date in March, the event was set in two different locations in order to comply with Covid-19 safety protocols.

Italian star Sophia Loren won the best actress award for her role in Netflix drama The Life Ahead, directed by her son Edoardo Ponti and distributed worldwide by Netflix. It is her seventh victory out of seven nominations. Loren also received an honorary lifetime achievement award, celebrating a career that has lasted more than 70 years. The actress received her first David award in 1959 for her performance in Matin Ritt’s The Black Orchid.

The D’Innocenzo Brothers drama Bad Tales went into the night with 13 nominations but walked away with a solitary award for editor Esmeralda Calabria. The film previously won best screenplay at the Berlinale, where it premiered in 2020.

The audience award, honouring the highest grossing film of the season, went to Checco Zalone’s Tolo Tolo - one of the few pictures in the line-up that had been distributed before the pandemic.

Actress: Sophia Loren, The Life Ahead