Festival to host 65 UK Premieres, including Terrence Malick’s Voyage Of Time and Raoul Peck’s I Am Not Your Negro. 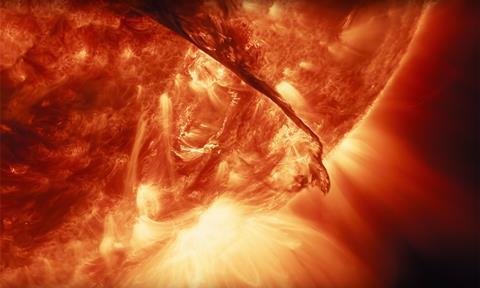 The full programme for the 2017 Glasgow Film Festival (Feb 15-26) has been revealed.

As previously reported, Glasgow will kick off with the European premiere of Handsome Devil, a coming-of-age drama starring Andrew Scott and directed by John Butler (The Stag).

The world premiere of Mad To Be Normal, starring David Tennant as renowned Scottish psychiatrist R.D. Laing, closes the festival. Tennant is expected to attend.

Other highlights include UK Premieres of Raoul Peck’s I Am Not Your Negro, Terrence Malick’s Voyage of Time: Life’s Journey [pictured], Cate Shortland’s Berlin Syndrome and Aki Kaurismäki’s The Other Side of Hope.

Five female filmmakers are in contention for the audience award: Maysaloun Hamoud (In Between); writer-director Rachel Lambert (In The Radiant City); documentary director Benthe Forrer (The Chocolate Case); BIFA-nominated writer-director Hope Dickson Leach (The Levelling); and writer-director Alankrita Shrivastava (Lipstick Under My Burkha). The other films up for the award are Jawbone, Halfway, Free in Deed, Marija and Old Stone.

As previously announced, there will be “immersive” pop-up cinema screenings of The Lost Boys (to celebrate its 30th Anniversary) on February 17, a 30th anniversary of The Princess Bride on February 25 and a Secretary 15th anniversary screening in association with Torture Garden fetish club on February 24.

There will also be a “Dangerous Dames” strand of free screenings to celebrate film noir femme fatales, including The Postman Always Rings Twice and Body Heat.

John Carpenter’s The Thing will screen on an actual ski slope, while Cajun noir classic The Big Easy will screen at the new Barras Art and Design centre with a post-screening live gig from Hoodou Bayou.

The festival will showcase 310 events and screenings from 38 countries at venues including the GFT, CCA, Cineworld and Grosvenor cinemas.