The winner of the Eurimages Lab Project Award from Haugesund’s Works In Progress presentations was Katrín Ólafsdóttirs The Wind Blew On from Iceland. 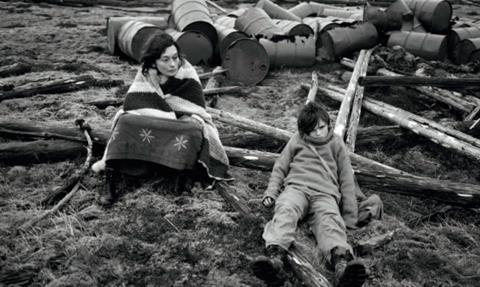 The jury was comprised of Norwegian filmmaker Bent Hamer, Dorien van de Pas of the Netherlands Filmfund, and Heidi Zwicker of Sundance.

Head of New Nordic Films Gyda Velvin Myklebust noted that the award was aimed at a film that was “experimental in form or content”.

A 16-year-old boy, Foad, in Ryd, southern Sweden has to do 12 misdeeds to prove his loyalty to his gang of mates in this comedy/drama. Aliu said, “I made this film where I grew up…When I was growing up there was a style of storytelling kids around me were doing, I wanted to bring some of that joy back.” He cast local teenage boys, all first-time actors, in the lead roles. Jonjic from Zentropa Sweden said the film was shot in winter 2016 and is now editing, for delivery in early 2017. No sales company attached yet.

This dialogue-free feature ruminates on how mankind shapes the Earth today. Kurlandsky said it is “a cinematic study, a mixture between a contemplative dream, basic history lesson and a contemporary museum…we are reflecting on where we as a global community come from and what we are today.” Huber added that the film would explore both traditional cinema release as well as live musical performances, educational and policymakers screenings. Forty percent of principal photography is finished; no sales company attached yet.

Passengers leaving a ruined earth for Mars realise they will drift through space forever in a giant spaceship. Rogell  said, “It’s Sweden’s first film set in space. It’s a psychological sci-fi based on a novel from 1956 by Nobel laureate Harry Martinson.” She said the film will explore the question, “How will you survive when there’s no hope left?” To shoot in November and December. No sales company attached yet.

A successful surgeon in Copenhagen wants to avenge his brother’s death in the city’s criminal underworld. Ahmad said his second feature is “an action drama that refers to films I loved when I was a kid.” Ahmad recruited a mix of actors and non-actors. “It’s a critique of violence through violence, I want to reach these people.” The film is in post now and Scanbox will release in early 2017 in Denmark. No sales company attached yet.

Inspired by a real story of the director’s friend, who almost became the international face of a famous energy drink after making viral videos. The project is also a satire of the advertising, branding and celebrity worlds. Borgli said his debut feature’s subject, Amir, is “Andy Kaufman sort of figure” who he met in 2012. “Amir is playing himself in a reconstruction, and everyone involved is played by actors. There’s another layer to the film where I’m interviewing him about the events.” TrustNordisk handles sales.

A survival drama taking place in a construction tunnel underneath Copenhagen, where a PR coordinator has to survive alongside a Portuguese miner and Eritrean worker after an accident. Kloster Bro said, “It’s tale of leaving your kids to go to work, a psychological drama and a chamber play.” The film is part of New Danish Screen’s new Skitsen initiative and Lyngbo Hjort said, “that allowed us to develop it cinematically from the outset. We had a chance to develop the story and characters and improvise along the way.” She added that the film is writing, shooting and editing at the same time, and will continue to shoot more in November and December 2016 for delivery in autumn 2017. No sales company attached yet.

About a group of teenage girls who meet and form a club. Adomeit said, “We finished shooting a week ago, the film is made without a traditional script in collaboration with the eight girls and their real-life personas.” For example, one actress’ anorexia was included in the storyline. The film will be delivered in spring 2017. No sales company attached yet.

A Norwegian widower takes his adopted son back to Colombia to look for his biological mother. Osnes of Motlys said 70% of the film is shot in Colombia and it is in sound post now to be delivered by the end of 2016. Films Distribution handles international sales.

Animated family film about tiny animals who try to make friends with bigger animals in Huckybucky Forest. Sivertsen said, “It’s based on the most famous children’s book in Norway, by Thobjorn Egner, first published in 1956 and selling more than 250,000 copies.” As with the team’s previous Louis & Nolan films, the team are making “as a classic stop-motion film with puppets.” The film also includes 19 original songs. Production started September 2015 and will wrap by the end of this month. The film will premiere in Norway and across Scandinavia on December 25. SF Studios handles international sales.

An absurd comedy Western about greed, corruption, power, and immigration set in a wealthy mining town in Norway. Eymundsson said, “We are excited to brining [Utkilen’s] unique style and humour into the feature film format…it’s a satirical comedy with a lot of references to the Western genre.” The film is shooting now in southern Norway.

Thorkildsen added, “Jorn works by casting actors first, he selected an ensemble of actors three years ago and they have talked about life and their personality. Based on those conversations, Jorn writes what he calls heightened characters based on the actors themselves, and then he starts plotting their story.” Partners include Scotland’s Hopscotch Films and France’s Le Bureau.

A retired police office tries to stop two young men from killing each other in a small Lapland village. Hiltunen said that, “the film is set in both Finnish and Swedish border.” The film is still editing and the Finnish premiere is set in March 2017. No sales company attached yet.

A rich Danish artist’s (Soren Malling) life is disrupted when he is visited by a son (Jakob Ostebro) he never knew, a street artist. Sieling said, “The father is a superstar, the greatest artist in Denmark and known all over the world, 28 years ago he left his pregnant wife, 28 years later the son shows up. It’s a story about a son who doesn’t know his father and a father who doesn’t know his son. And how the prince enters the castle and wants to take over.” The film is now in post production to launch in Denmark and Norway in March 2017. SF Studios handles international sales.

A film about a woman (played by Silje Salomonsen) looking at the elements that tore her marriage apart; in an “existential roller coaster of dreamlike encounters.” Cranner said the film will shoot starting next week. “The film is a psychological drama that unfolds over the course of one night for one woman…it involves the solving of a mystery that is set up at the beginning of the film…The film is structured like a fairy tale, Elena meets a series of characters who have their own bit of darkness they want to share with her. For each scene we get to know more about her own background and who she is.” The team has shot 25% of the film; no sales company attached yet.

The actress’ directorial debut is a feminist experimental trip through the life of her grandmother. Sachsse said “it is a fast-paced road movie in film noir style, a modern day Red Riding Hood with three generations of East German women.” Kirberg added, “The film mixes original footage from the fictional storyline with family films from 1950s and 1960s, old photos, archive and found footage…We believe it is important to shine a new light on female roles in the GDR.” The main shoot will happen in spring 2017; no sales company is attached yet.

A collage of five stories about men in their 30s struggling with adulthood. Otten said, “It’s a daring debut…It’s an absurd tragicomedy with a heart. It’s about five bachelors struggling with adulthood…We filmed for nine months so the director could continue to enhance the individual stories.” The film was pitched in Haugesund’s Co-Production Market last year and will be delivered in 2017. No sales company is attached yet.

This English-language 3D animated family film is based on an original story about a sparrow raised by a stork family who wants to go to Africa to prove his heritage. Along the way he meets a disco-singing parakeet and an owl with an imaginary friend. Knudsen first pitched the film at Haugesund four years ago. “It’s a lot about identity and being brave,” she said. The film will be delivered by the end of 2016 and it will roll out from February to spring and summer 2017. Global Screen handles international sales and has already sold the film to 98 territories but still has some major territories to close.

Jorunn Myklebust Syversen’s debut feature is about a man (Anders Baasmo Chirstiansen) who leaves his city job to live on a farm, which is not as quiet as he hoped because of pushy relatives. Ekerhovd said, “It’s a Norway we very seldom see on film.” The micro-budget film started as a short. The film is final stages of editing now for delivery in 2017.  No sales company attached yet.

A little boy is on a journey through an unsettling landscape.

Ólafsdóttir said the film is “a post apocalyptic western with elements of a musical.” The film has shot “from 2011 following the boy as he is growing up.” She added that she doesn’t work from traditional scripts and instead works closely with the actors to collaborate. No sales company attached yet.

A film following two brothers at work in a wintry town, when complications arise between them and another family. Palmason said, “It’s a lack-of-love story, the focus is on the younger brother, Emil, and his desire and need to be loved. That’s the core of the film.” He continued, “In the process of making it I tried to allow things to emerge…we tried to film wherever it wanted to go, to be truthful to the narrative and see what happens.” To be delivered at the end of 2016. No sales company attached yet.