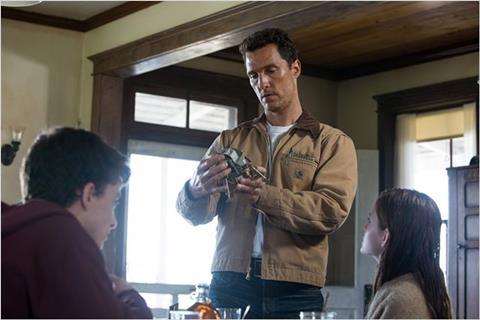 Ahead of the arrival of Katniss and co this week, Interstellar posted a terrific hold at the UK box office to remain top for the second straight week.

Inception’s $56m (£35.8m) UK haul is probably a step too far for Interstellar, but if it manages a similar hold this coming weekend, a UK result of at least £25m is a definite possibility.

Proving that it’s more of a enduring series than critics would believe, eOne’s Nativity 3: Dude, Where’s My Donkey?! landed third with a healthy $2.8m (£1.8m) opening from its 453 sites.

Rounding off this week’s top five, Fox’s The Drop recorded a solid UK bow of $964,000 (£616,103) from its 342 sites. That already marks director Michael Roskam’s best-ever UK performance, unsurprising given that Bullhead’s widest reach was 17 sites.

Also for Sony, Third Person was released in 10 sites and grossed $4,700 (£3,000). Unsurprisingly, that’s director Paul Haggis’ lowest-ever UK debut but it’s also the smallest release of any of his films by some distance.

The film benefitted from support from the Lithuanian community and achieved its gross without wider support from circuit chains, given it’s out on VoD next month. Its top site was Showcase Newham, with $39,000 (£25,200) taken over the two days.

This week sees saturation releases for Lionsgate’s The Hunger Games: Mockingjay Part 1 (opens Nov 20), Universal’s Get On Up and eOne’s The Homesman.

Curzon Film World’s My Old Lady and Metrodome’s What We Do in the Shadows both receive wide releases, while Sony’s No Good Deed and New Wave’s Winter Sleep are among the films that are receiving a limited release.