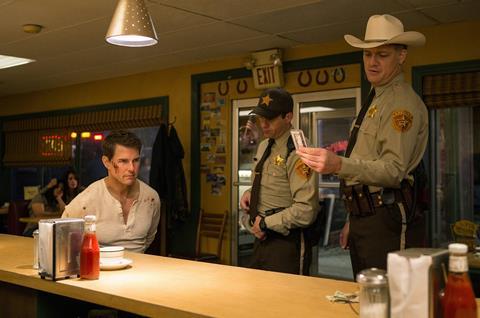 Paramount Pictures and Skydance Productions’ action sequel landed the top spot in the likes of Russia ($2m), Taiwan ($1.6m), Indonesia ($1.9m) and the UAE ($1.3m), while it bested the opening of Jack Reacher in the UK with $3.3m.

It journeys into China and Japan next weekend.

The UK led the way with a preview-boosted $6.9m bow, followed by France on $4.4m and Germany with $1.9m. In Denmark, it has already overtaken Despicable Me’s lifetime total at $2.2m.

Miss Peregrine’s Home For Peculiar Children grossed an additional $14m from its 75 markets for $150.5m to date.

Making its overseas bow in 22 markets, Keeping Up With The Joneses uncovered $2.5m, with Australia providing the best opening at $847k to chart third. Its next major release comes in China on November 8.

Retaining the top spot in South Korea was Luck-Key with an estimated $11.9m second weekend for $31.3m to date, according to ComScore.

Crime drama Heartfall Arises grossed an estimated $11.76m from its three territories on its overseas debut, according to ComScore.

In Studiocanal territories, the threequel opened behind Inferno in Germany with a $3.4m debut and held well in France with a $2m third weekend for $9.4m to date. Universal’s release of the film in the UK provided $1.3m for $56.8m after six weeks.

Blumhouse Productions, Platinum Dunes and Hasbro’s prequel scored number one openings in five Latin America territories, including a $2.2m bow in Mexico, and debuted with $944k in the UK from 401 sites.

It opens in Italy, Poland, Spain, Ecuador, Ukraine and the UAE, among others, next weekend.

In Spain, Focus Features’ A Monster Calls retained the top spot for the third straight week with $2.9m for $17m to date. It is already the fourth highest-grossing film of the year.

Laika’s Kubo And The Two Strings and American Honey stand at $19m and an early $677k, respectively.

Among its new openings, the thriller bowed to a preview-boosted $1m in Germany from 351 sites and to $1m in Brazil to chart second. It fell only 22% in Taiwan with a $594k second weekend for $1.9m to date.

It opens in Italy and Russia next weekend, followed by France, Australia, Mexico and the UK the following week.

Leading the way in France was Brice 3 with an estimated $6.05m debut, according to ComScore.

From its 32 Mister Smith territories, The Girl On The Train amassed an estimated $6m for $42.5m, with the adaptation opening second in Spain behind local hit A Monster Calls.

Including Universal territories, it has grossed $45.1m.