K5 International to sell Danish post-war film Land Of Mine

K5 International has taken on distribution for Martin Zandvliet’s Land Of Mine (Under Sandet) about a sensitive chapter in Danish post-war history. 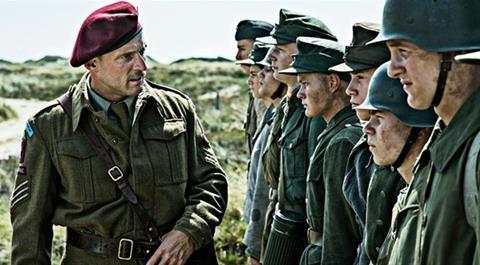 Zandvliet’s most ambitious film to date after his 2009 debut Applause and 2011’s A Funny Man is inspired by true events where more than 2,000 German prisoners of war were forced shortly after the Second World War to clear mines laid by German occupying forces along the Danish West coast. More than half of the young Germans were killed or seriously maimed.

Roland Møller, who made his screen debut in Tobias Lindholm and Michael Noer’s prison drama R, is cast in his first lead role as the Danish Sergeant Carl Leopold Rasmussen in charge of the prisoners, with Mikkel Boe Følsgaard, who received a Silver Bear as Best Actor at the 2012 Berlinale for his performance in A Royal Affair and was a Shooting Star last year, as Lieutenant Ebbe.

Other leads - among the German POWs – have been taken by the stars from the recent German adaptation of Huck Finn, Louis Hofmann and Leon Seidel, and former Swiss Shooting Star Joel Basman who appeared in George Clooney’s The Monuments Men.

The co-production between Denmark’s Nordisk Film and Hamburg/Berlin-based Amusement Park Film was made in association with Danmarks Radio (DR), the Danish Film Institute, Koch Media, German public broadcaster ZDF, and with backing from Filmförderung Hamburg Schleswig-Holstein and the DFFF.

Koch Media will release the film theatrically in German cinemas.

Earlier this year, Malte Grunert’s Amusement Park Film wrapped production on the internationally renowned video artist Omer Fast’s Remainder, based on the novel by Tom McCarthy, and is now preparing its latest collaoration with David Mackenzie, Stain On The Snow, to begin shooting at the end of 2014.

Grunert also produced Anton Corbijn’s A Most Wanted Man – to be released by Senator in Germany on September 11 – and served as a co-producer on Mike Leigh’s Cannes winner Mr. Turner.