First image released from the period comedy, featuring the stars of Horrible Histories. 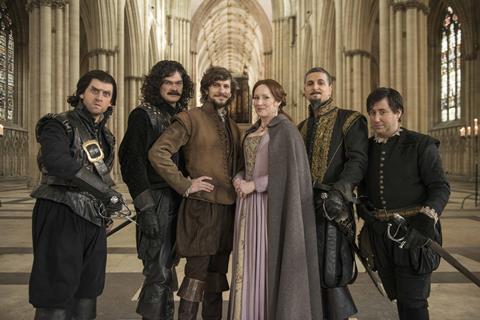 Koch Media is to release period comedy Bill in cinemas across the UK on Feb 20, 2015.

Directed by Richard Bracewell (The Gigolos), the film the story of what really happened during Shakespeare’s ‘Lost Years’ and how “hopeless lute player Bill Shakespeare leaves his family and home to follow his dream”.

Announcing the release, Koch described the feature as “a tale of murderous kings, spies, lost loves, and a plot to blow up Queen Elizabeth.”

The script is written by Laurence Rickard and Ben Willbond, and developed through BBC Films and Punk Cinema. The film is produced by Charles Steel, Alasdair Flind and Tony Bracewell.

BBC Films, the BFI, Screen Yorkshire through its Yorkshire Content Fund and LipSync will finance. Koch Media will distribute the film in the UK, Germany and Scandinavia.

Bill is currently being filmed on location in Yorkshire, London and West Sussex.

Independent boarded international sales on the film before the EFM.