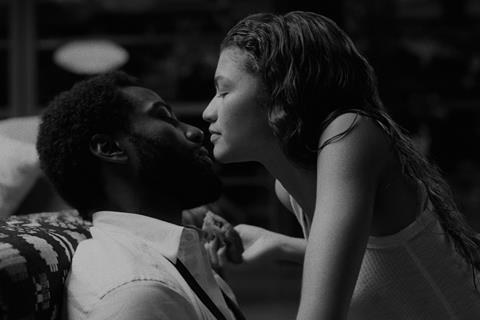 The platform said on Wednesday (November 18) the film will debut on the platform on February 5 2021, well within the February 28 2021 qualifying cut-off date for Oscar hopefuls.

Netflix reportedly paid in the region of $30m on worldwide rights to the black and white film after Endeavor Content and CAA showed Toronto International Film Festival buyers a 20-minute promo reel.

The romance shot on 35mm from June 17-July 2 at Feldman Architecture’s Caterpillar House in Carmel, California, under Covid-safe protocols.

Washington (Tenet) plays a filmmaker on the cusp of success with his latest movie who returns home from the premiere with his girlfriend (Zendaya, Dune, Spider-Man: Far From Home) as truths about the relationship bubble to the surface.

Malcolm & Marie joins a Netflix awards slate that includes Ma Rainey’s Black Bottom, Mank, The Trial Of The Chicago 7, Hillbilly Elegy, and The Life Ahead, and The Midnight Sky, among others.