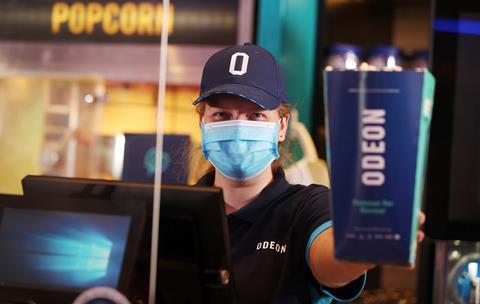 Odeon will reopen its first cinemas in the UK and Ireland from July 4, as part of a staggered process throughout July.

It has selected 10 venues to reopen on that date, including the Trafford Centre near Manchester, the Milton Keynes Stadium, and five of its Luxe venues including at Birmingham Broadway Plaza and Durham.

Seventeen further venues will open on July 10, with another 31 following on July 13. Three of this latter group are in central London, including the company’s flagship Luxe Leicester Square site.

Further reopenings include eight sites on July 15, and 32 on July 16.

The company has also designed what it calls the ‘Odeon safer cinema’ experience, in accordance with the latest government guidelines.

The company has also committed to enhanced cleaning measures including guest sanitiser stations, more frequent cleaning on all high-contact areas, and additional health and safety training for staff, who will have PPE including face coverings and gloves.

Customers will be able to book tickets from today (June 25), with venues initially screening recent titles including 1917, Little Women, Bad Boys For Life and The Greatest Showman, as well as older films such as Dirty Dancing and a remastered 40th anniversary version of Star Wars: The Empire Strikes Back.

Odeon is the latest exhibitor to outline its reopening plans following the government’s confirmation that cinemas can operate again from July 4. Cineworld, Vue, Showcase, and Everyman set out their protocols for reopening on Tuesday.