Inside the Asia-Pacific, Middle East, and African entries to this year’s Foreign-Language Oscar race. 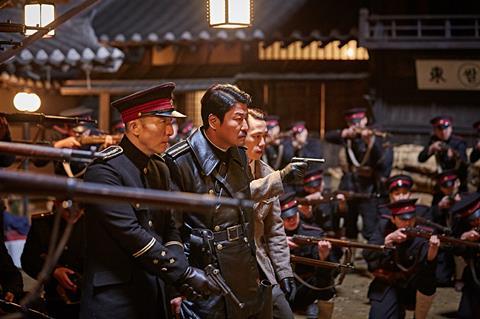 The Age Of Shadows (South Korea)

Set in 1920s Seoul, this spy thriller chronicles a group of Korean resistance fighters battling the Japanese occupation. The film marks Warner Bros’ first Korean-language production. Despite submitting films to the Academy Awards race since 1962, South Korea has never received a nomination in the foreign-language category.

Premiering in the Un Certain Regard strand at this year’s Cannes Film Festival, prison drama Apprentice depicts a young Malay correctional officer who becomes the assistant to the establishment’s long-serving chief executioner - the same man who executed his father. If accepted, the film would be Singapore’s first foreign language Oscar nomination.

This family drama touches on the sensitive subject of autism and follows a couple struggling to come to terms with the special needs of their young son. Tunku Mona Riza’s debut feature is only the fourth Malaysian film ever submitted to the foreign language Oscar category.

Before The Fall (Cambodia)

Nepalese film-maker Min Bahadur Bham’s debut film won the International Critics’ Week Fedeora Award for best film at Venice. Set in 2001, it portrays two young friends in a war-torn village in northern Nepal who embark on a journey during a fragile ceasefire to find their missing hen.

A Father’s Will (Kyrgyzstan)

Named best first feature at this year’s Montreal World Film Festival, A Father’s Will follows immigrant Azat as he returns from the US to his family village in Kyrgyzstan after his father’s death. Paying off old debts, Azat meets an uncle who was once imprisoned because of his father.

The fifth documentary from journalist-turned-filmmaker Pietra Brettkelly (Maori Boy Genius) looks at the restoration of a Kabul film archive destroyed by the Taliban and, in doing so, becomes a powerful portrait of Afghan history. After making its debut at Venice in 2015, when it was nominated for the Venezia Classici Award, the film has played across the international festival circuit.

Hang In There, Kids! (Taiwan)

This lighthearted drama about three boys growing up in a mountain tribe is the second feature from Taiwan’s first female aboriginal director, Laha Mebow. It walked away with five major prizes at Taipei this year and also won awards at Mumbai, Bucheon in South Korea and Giffoni in Italy.

House Of Others (Georgia)

The feature debut of commercial and video director Rusudan Glurjidze, the semi-autobiographical House Of Others takes place in the aftermath of the Georgian Civil War, when the conflict’s winners were permitted to move into homes occupied by those who had been defeated. The drama won this year’s East of the West competition at Karlovy Vary.

This 2015 Venice Horizons entry combines Tamil and Telegu language. M Chandrakumar’s autobiographical novel Lock Up provides the source for this tale of four young Tamil men falsely accused of a house burglary in Andhra Pradesh and caught up in a brutal web of political and police corruption. India was last nominated in 2002 for Lagaan.

Horror tale Karma (also known as Arpat) centres on a 19-year-old man who becomes a monk after killing a girl in an accident and being confronted by her spirit. According to reports, the film was initially banned by Thai censors because of scenes that could be deemed offensive to Buddhism, but cuts were made to secure its release.

The repression that accompanied Suharto’s seizure of power in Indonesia in 1965, which was recently put in the spotlight by documentarian Joshua Oppenheimer’s The Act Of Killing, is spun into a prestige romantic drama here, complete with musical interludes. Centring on a group of Indonesian exiles, Letters From Prague is 31-year-old Angga Dwimas Sasongko’s fifth feature.

Marking Pakistan’s sixth entry to the foreign language Oscar race, Mah E Mir is aiming to be the country’s first nomination in the category. The film follows a contemporary poet who finds parallels between his life and the life of famous 18th-century poet Mir Taqi Mir. Sanam Saeed, Iman Ali, Aly Khan and Fahad Mustafa star.

Nagasaki: Memories Of My Son (Japan)

Octogenarian auteur Yoji Yamada’s 83rd film is a moving post-Second World War drama set in Nagasaki about a young man, killed in the atomic bombing, whose ghost visits his mother to find peace. Yamada’s The Twilight Samurai was shortlisted in 2003, while Yojiro Takita’s Departures remains the only Japanese film to win the foreign-language Oscar, in 2009.

This crime thriller is not a standard whodunit, but an investigation into the psyche of the killer and his young victim, and how society made them both so vulnerable. Toplined by superstar Aaron Kwok, Philip Yung’s film collected seven Hong Kong Film Awards, including all the acting gongs, best director and best cinematography for Christopher Doyle.

Bangladesh-born film-maker Tauquir Ahmed’s fourth feature looks at the country’s ex-pat labourers, and the lengths some will go for new opportunities abroad. It stars Mosharraf Karim, who featured in Bangladesh’s 2016 entry Jalal’s Story and 2010 entry Third Person, and is produced by Impress Telefilm.

Huo Jianqi’s biopic follows Chinese monk Xuanzang, known for bringing Buddhist scriptures to China from India, who embarks on a challenging 17-year overland journey during the Tang dynasty. This collaboration between China Film Group and India’s Eros International is headlined by popular actor Huang Xiaoming, who plays the title role.

In his debut feature, Daryne Joshua focuses on the life of screenwriter John W Fredericks, a petty criminal who used his storytelling skills to become a motivational speaker, warning teens about the perils of gang life and visiting South African prisons. South Africa won the Oscar in 2006 with Gavin Hood’s Tsotsi.

The opening film of this year’s Un Certain Regard section at Cannes, Diab’s hard-hitting Clash is set against the backdrop of riots in Cairo at the end of Islamist President Mohamed Morsi’s reign in 2013. It enjoyed a record-breaking opening week at the Egyptian box office and was publicly endorsed by Tom Hanks on social media.

A Mile In My Shoes (Morocco)

Said Khallaf’s debut feature won the Grand Prize at the 2016 Tangier National Film Festival, then played at Durban International Film Festival in South Africa. Described as both psychological thriller and social drama, A Mile In My Shoes offers insight into the lives of street children, telling the story of one particular child who takes revenge on society.

Producer Lotfi Bouchouchi makes his feature directorial debut with this Algerian War of Independence drama, in which villagers must drum out an enemy of the occupying French army within their community or face deadly consequences. Nadia Kaci and Laurent Maurel star. If nominated, The Well would be the first Algerian foreign language Oscar nominee since 2010’s Outside The Law.

Jordan’s Oscar contender is based on the true story of a young, recently married Palestinian schoolteacher who is wrongfully arrested and imprisoned in an Israeli jail. She gives birth behind bars and struggles to raise her son in the bleak surroundings. Director Mai Masri (best known for her documentary work) has cited Steve McQueen’s Hunger as one of her inspirations.

Dubbed ‘Saudi Arabia’s first rom-com’, writer-director Mahmoud Sabbagh’s debut feature is about a couple dating in a society where public meetings are prohibited. It premiered at the Berlinale in February and played as a special presentation in Toronto. The film marks Saudi Arabia’s second entry to the foreign language Oscar race, after Wadjda in 2013.

Mustafa Kara’s drama premiered at the 2015 Tokyo International Film Festival, where it won the best director and the WOWOW Viewer’s Choice awards, and was recently released in its native Turkey. It tells of a young boy and his family who live in a mountain village, far away from modern life. Turkey has never had a film nominated for this category.

This drama stars real-life brothers Wrya and Dana Ahmed as two little people who go on a dangerous road trip to deliver a pair of Kurdish slippers to football superstar Cristiano Ronaldo. El Clasico is the sophomore feature from director Halkawt Mustafa, who previously made 2011’s romantic drama Red Heart.

I Am Nojoom, Age 10 And Divorced (Yemen)

Based on a real-life story, Yemen’s first submission tells the hard-hitting tale of a 10-year-old girl struggling to obtain a divorce after she was married off to prevent a public scandal following the rape of her sister. The film won the Muhr Award for best fiction feature at the 2014 Dubai International Film Festival.

Premiering at Toronto in 2015, The Idol stars Tawfeek Barhom as an aspiring musician living in Gaza who hopes to achieve his dream of competing on the TV talent show Arab Idol. Abu-Assad has now directed a third of Palestine’s total Oscar submissions, and both his previous entries, Paradise Now (2005) and Omar (2013), have gone on to be shortlisted.

Oscar winner Asghar Farhadi’s story of a couple whose relationship begins to turn sour during their performance of Arthur Miller’s Death Of A Salesman premiered in Cannes this year. The hot seller for Memento won best actor for Shahab Hosseini and best screenplay for Farhadi (A Separation) on the Croisette.

After earning top awards at the work-in-progress sections of the Jerusalem and Locarno film festivals, Zexer’s Sand Storm triumphed at Israel’s Ophir Awards, becoming the first entirely Arabic-language film to win best film at the ceremony. It follows a fiercely independent Bedouin girl whose headstrong nature puts her in difficult circumstances in her intimate community.

This Lebanese crime thriller with a comic twist has enjoyed a successful run on the festival circuit, winning prizes in Marrakech and Beijing. Set in Beirut, Mir-Jean Bou Chaaya’s debut follows a band of drug-smuggling brothers who swap a pizzeria for film production as the cover for their nefarious activities.