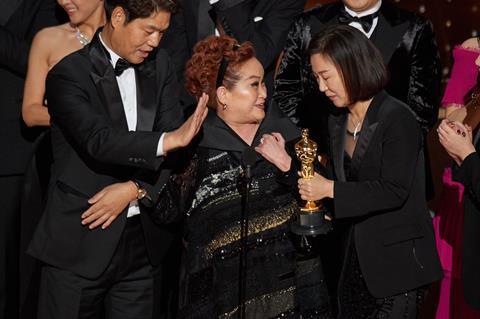 Audience members at the 92nd Oscars demanded the dimmed lights be turned back on to allow the cast and crew of best picture winner Parasite to finish their speeches, on a stunningly successful night for the film.

Accepting the final award of the night and the film’s fourth overall, producer Kwak Sin Ae noted the significance of its success. “We never imagined this to happen, we are so happy,” she said, translated from her native Korean. “I feel like a very opportune moment in history is happening right now.”

“I express my deepest gratitude and respect for all the members of the academy for making this decision.”

When she finished her remarks, the lights began to dim in the auditorium for the end of the ceremony.

However, this drew instant opprobrium from the audience of stars, and attendees including Tom Hanks, Charlize Theron, Margot Robbie and Regina King began chanting for the lights to be fully relit to allow the Parasite team to enjoy their moment.

The audience demands that the #Oscars let the creators, cast, and crew of Best Picture winner #Parasite finish their speeches pic.twitter.com/Itd6ZuHq72

“I like everything about him,” she said. “His smile, his crazy hair, the way he talks, the way he walks and especially the way he directs.”

“Without you, our Korean film audience, we are not here,” continued Lee.

Earlier in the night, Bong had received standing ovations when Parasite won best international feature film and he then won best director.

“If the Academy allows, I would like to get a Texas chainsaw and split this trophy into five,” he said in his speech for the latter, after praising his fellow nominees individually.

“Thank you, I will drink until next morning,” he then joked.

The Academy’s decision to award a film not in the English language with its main award for the first time was the culmination of a night when international representation and cooperation were in focus.

During her performance of best song nominee ‘Into The Unknown’ from Frozen II, Idina Menzel welcomed several other singers on stage with her, each of whom sang a line from the song in a different language before joining the chorus in unison.

The issue of representation of communities on their own lands was raised by Taika Waititi, winner of best adapted screenplay for Jojo Rabbit.

“I dedicate this to all the indigenous kids in the world who want to do art, and dance, and write stories,” he said. “We are original storytellers and we can make it here as well.”

Best actor winner Joaquin Phoenix picked up the theme of diversifying the industry from his speech at the previous weekend’s Baftas. “The greatest gift [acting] has given us is the opportunity to use our voices for the voiceless,” he said.

“I’ve been thinking a lot about some of the distressing issues we’re facing collectively” continued Phoenix. “Sometimes we’re made to feel we champion different causes – I see commonality.”

Phoenix, who is a vegan, then gave an impassioned plea for reconnecting to “the natural world”, including a graphic description of how cows are artificially inseminated to give birth and produce milk for human consumption.

He finished his lengthy speech by quoting a lyric by his late brother, the actor River Phoenix: “Run to the rescue and peace and love will follow.”

In the best international feature award, presenter Penélope Cruz made no speech at all, simply introducing the nominees before announcing Parasite as the winner.

The sincerity of these messages was interspersed with several attempts at humour, some of which proved more successful than others.

James Corden and Rebel Wilson garnered arguably the biggest laugh of the night when poking fun at their roles in Tom Hooper’s much-maligned Cats by presenting the award for visual effects in full-body feline costumes.

With no host for the second year running there was a succession of big-name talent – over 40 names - presenting both each other and the awards.

While this upped the star quotient, it created a rather choppy viewing experience. Several awards were presented by pairings who delivered a quip or two, with some, such as Ray Romano and Sandra Oh, falling flat.

One of the presenters, 1917 lead George Mackay, referenced the stuttering setup, saying: “Time is of the essence, which is why I’m here to introduce myself, before introducing someone else, who will, in turn, introduce someone else.”

Those pairings with a stronger comic rapport such as openers Steve Martin and Chris Rock, or Maya Rudolph and Kristen Wiig, proved more popular, raising the question of whether a single host or pairing could return next year.

While the surprises were mainly kept to Parasite’s big night, rapper Eminem did an unannounced performance of his 2002 hit Lose Yourself. The track won best song at the 2003 Oscars, although Eminem himself was not present to collect the award.