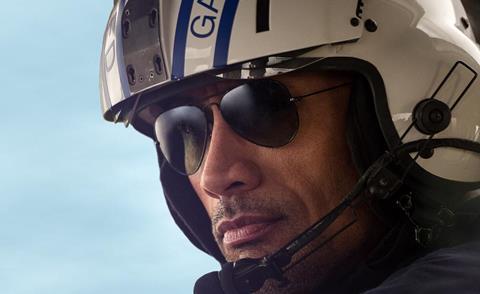 Replicating its chart-topping domestic success, San Andreas cracked Pitch Perfect 2’s chance of a hat-trick at the top of the UK box office.

San Andreas has also already outgrossed the entire run of stablemate disaster film Into the Storm, which whipped up $4.3m (£2.8m) last year, but couldn’t quite match the $9.9m (£6.5m) bow of 2012, which arguably benefitted from a more well-known director in Roland Emmerich.

It may have been knocked off the top spot, but Pitch Perfect 2 continued to shine with a $2.8m (£1.87m) third weekend.

Disney’s adventure is now up to $6.2m (£4.11m) after ten days in play and has at least avoiding being director Brad Bird’s lowest ever UK performer having passed the $3.5m (£2.3m) result of The Iron Giant.

StudioCanal’s rom-com failed to come close to the $2.2m (£1.45m) debut of fellow homegrown rom-com I Give It a Year from slightly more sites at 396.

It will hope that good word-of-mouth can sustain it in the weeks ahead.

In terms of director François Ozon’s outings in the UK, it has now overtaken Young and Beautiful, but won’t catch either Potiche or In the House.

Curzon Film World’s Queen and Country is released in London ahead of a nationwide expansion from June 12.