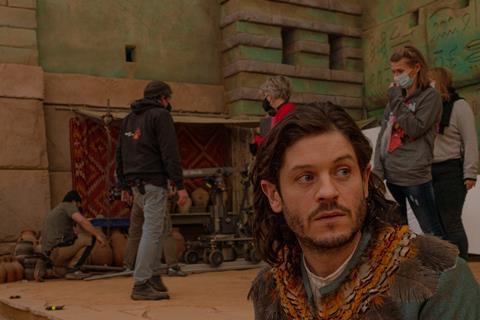 Iwan Rheon on the set of ‘The Magic Flute’

German sales outfit Sola Media has acquired international rights to Florian Sigl’s The Magic Flute which is shooting at the Bavaria Film Studios on the outskirts of Munich in Germany. It is being produced by Roland Emmerich’s Centropolis Entertainment with Tobis Entertainment and Quinta Media.

German comedian, musician and actor Tedros Teclebrhan, whose recent screen credits include System Crasher, has also joined the international cast of the production.

The Magic Flute is set in present-day Europe and follows a 17-year-old boy, played by UK newcomer Jack Wolfe, who travels from London to the Austrian Alps to begin studies in classical singing at the legendary Mozart boarding school. Once there, he happens upon a centuries-old portal in the school’s library one night, which catapults him into the fantastic world of Mozart’s opera The Magic Flute.

Speaking halfway through the film’s 41-day shoot, producer Christopher Zwickler said the film aimed to “make Mozart’s opera accessible to a younger audience and inspire them to take an interest in classical music“.

The production is set to move at the end of this week to locations in Mozart’s birthplace of Salzburg and will then complete its overall 41-day shoot on the Canary Islands.