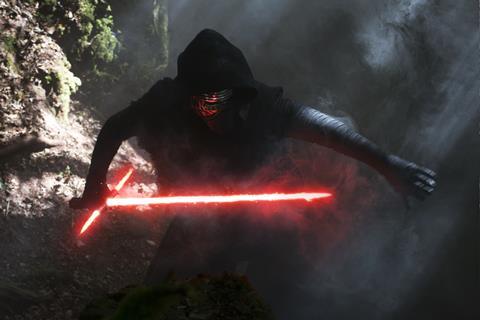 Star Wars: The Force Awakens will likely become the biggest film of all time at the UK box office at some point this week.

The weekend saw it set another daily record, with its $6.35m (£4.3m) haul on Saturday marking the biggest ever third Saturday at the UK box office.

Given the end of the festive period, it’s uncertain whetherThe Force Awakens can make up the £6m midweek, but it’s guaranteed to do so at some point this coming weekend.

Daddy’s Home has proven to be excellent counter-programming over the festive period as it recorded a strong second weekend of $4.3m (£2.89m).

Paramount’s comedy is now up to $12m (£8.12m) after just nine days in play and, as expected, is now Sean Anders’ best-ever UK performer. It has also overtaken the result of previous Mark Wahlberg/Will Ferrell collaboration, The Other Guys.

The week’s highest new entry came in the form of Fox’s Joy as it charted third.

The Danish Girl charted fourth on its UK bow as it lost out to Joy in the battle of the awards contenders.

Universal’s biopic grossed a steady non-final $2m (£1.37m) from its 511 sites. In terms of director Tom Hooper’s outings in the UK, The Danish Girl ranks behind Les Misérables and The King’s Speech, but ahead of The Damned United although that was only released in 236 sites.

Last January, fellow Eddie Redmayne biopic The Theory Of Everything launched with a much stronger $5.5m (£3.75m), including $1.2m (£802,598) in previews, although that biopic benefitted from a more recognized subject.

It may have been outpaced by Star Wars, but Spectre has its own achievement to celebrate.

This week sees a saturation release for Entertainment’s The Hateful Eight, as well as limited releases for Studiocanal’s A War, Altitude’s Bolshoi Babylon and Metrodome’s Partisan, among others.