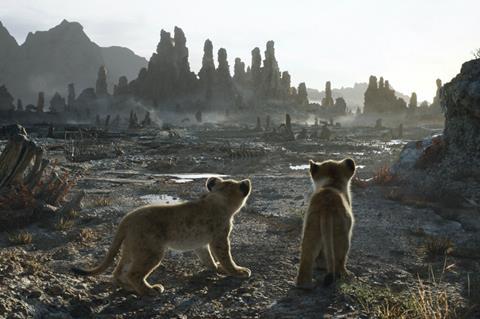 The Lion King took £16.7m in the UK this weekend, placing it top of the box office chart.

It is the second biggest opening of the year, behind fellow Disney release Avengers: Endgame, which started with a huge £31.4m in April, a UK box-office record. It’s also the second-biggest Disney live-action opening (the studio is classifying the film as live action due to its reliance on motion capture) behind Beauty And The Beast, which started with £19.7m in March 2017.

The Lion King continues Disney’s banner year at the UK box office. The studio now has the four highest opening weekends this year, and six of the top seven: Captain Marvel (£12.8m), Dumbo (£6.1m) and Aladdin (£5.7m), with Sony Pictures’ Spider-Man: Far From Home (£8.3m) the only non-Disney title in that list.

Apollo 11 increased by 37% this weekend, against the backdrop of the celebrations of the 50th anniversary of the famed moon landing, which is the subject of the documentary. It took £115,067 from 113 sites, taking its UK gross to £1.1m so far.

Tell It To The Bees, Annabel Jankel’s UK romance with Holliday Grainger and Anna Paquin, which premiered at Toronto last year, opened to £17,133 from 23 sites, including previews.