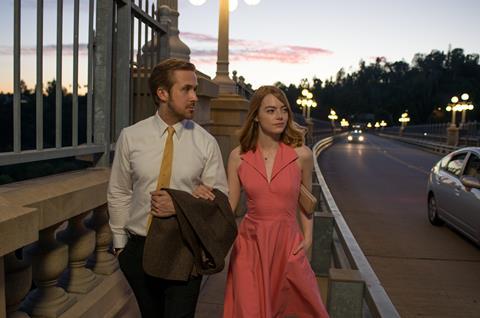 Having crossed £10m during its first week, La La Land continued to shine brightly at the UK box office.

With $5m (£4m) taken during its first Monday-Thursday period, there is no reason to doubt that La La Land will continue to draw big crowds midweek, meaning that it could hit £20m this coming weekend.

Sing will likely prevent it from a third straight week as the UK’s number one, but it should still enjoy a steady hold.

Though it won’t be officially reported until next week, Sing has had a record-breaking start to its UK run.

Universal’s latest Illumination Entertainment feature scored the biggest-ever previews for an original animation with a show-stopping $5.21m (£4.19m) haul on Saturday and Sunday.

As the sole major genre offering in the market at the moment and with decent reviews, it could enjoy a sustained run.

Rogue One: A Star Wars Story will break into the top ten highest-grossing films of all time at the UK box office this week.

It faced competition from Sing’s previews this weekend, but has still had a great run, taking more than eight times its opening weekend which is rare.

Like with the other awards contenders in the market at the moment, Jackie could receive a boost from Oscar nominations this week.

Studiocanal’s awards contender is now up to a promising $2.05m (£1.65m) after ten days in play, and could receive a further midweek boost if Casey Affleck gets his expected Oscar nomination this week.

eOne’s Denial receives a wide release, while Dogwoof’s Cameraperson and Curzon Artificial Eye’s Christine are among the films receiving a limited release.