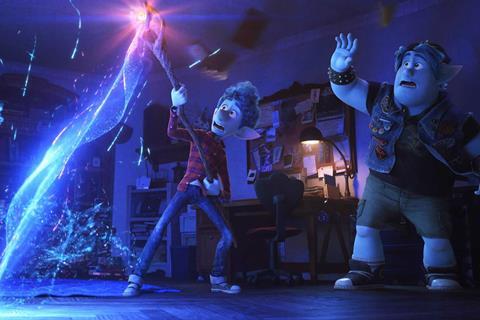 Concerns over the spread of coronavirus saw the UK box office take a hit over the weekend, with leading titles down at least 50% on the previous weekend.

While the films in the top five largely remain the same, the total box office taken this week for those titles is £3.31m – down 49% on last week’s total of £6.47m.

This was despite cinemas remaining open and no ban on public gatherings in the UK, where there have been close to 1,400 reported cases of COVID-19 and 35 deaths to date.

UK cinemas remain open as of March 16, however, the Scottish government has today issued guidance that gatherings of 500 people or more should not take place in the country from today while mass gatherings could be banned in the UK from this weekend as the outbreak intensifies.

Disney topped the UK box office charts for a second week with Pixar animation Onward. Its gross of £1.3m over the three-day weekend was down 50.8% on the previous weekend’s takings of £2.6m and it now stands at a total of £5.3m.

Philippa Lowthorpe’s Miss World drama Misbehaviour opened in eighth place, taking £330,000 over the weekend and up to £350,000 including pre-release activity. This is in spite of a strong cast that includes Keira Knightly, Gugu Mbatha-Raw and Jessie Buckley. Lowthorpe previously directed literary adaptation Swallows And Amazons, which opened to £677,188 in August 2016 and eventually took £3.1m.

But new Blumhouse title The Hunt opened with just under £400,000 across the weekend, rising to £542,311 when including previews. Starring Betty Gilpin and Hilary Swank in a satire on the political divide between the American left and right, the film’s release had been postponed from September following a spate of mass shootings in the US.

Sci-fi action feature Bloodshot, starring Vin Diesel, opened with £369,000 from 442 locations for a cume of £445 including the Wednesday opening.

Action-comedy My Spy, starring Dave Bautista and Chloe Coleman, opened with £345,575 from 448 cinemas over the three-day weekend for an average of £778.

After breaking the record for the highest-grossing non-English language film of all time in the UK, Bong Joon Ho’s Oscar-winning Parasite took a further £232,212 on its fifth weekend, taking it to £11.97m.

A re-release of The Elephant Man, marking its 40th anniversary and restored in 4K, took £5,108 across the weekend and £7,983 including previews.

DC Extended Universe title Birds Of Prey added £42,000 on its sixth session and has £8.81m in total.

Irish drama Calm With Horses, marking Nick Rowland’s directorial debut, grossed £31,527 for the weekend from 123 sites – a screen average of £256. Starring Cosmo Jarvis and Barry Keoghan, the film has taken £49,000 to date, including previews and the Irish release, handled by Element Distribution.

Brazil-France co-production Bacurau, which won the jury prize after playing in Competition at Cannes last year, took £10,767 over the weekend after opening in 21 site – a screen average of £513. Adding festival takings and previews, the film has now taking £43,906 to date.