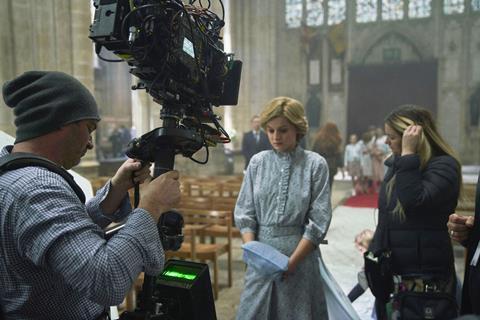 Emma Corrin on set of ‘The Crown’

The UK government has been accused of a “baffling” failure to capitalise on the thriving creative sector by the Lords Communications Committee as it warns the UK risks being overtaken by other countries.

In its 67-page At risk: our creative future report, the committee has called on senior figures within Westminster to recognise the commercial potential of the sector, which were worth £115bn pre-pandemic, more than the aerospace, life sciences and automotive industries combined and is estimated to support 4m jobs by 2030.

Led by Baroness Tina Stowell and counting former BBC director general Tony Hall among its members, the committee urged Rishi Sunak to put the creative industries at the heart of its future growth agenda and fix policies that are ‘characterised by incoherence’.

Issues which require attention include the UK’s competitiveness on tax incentives, gaps in skills policy and a relaxation of intellectual policy.

Stowell said that wider government must eschew the perception of the DCMS as a ‘ministry of fun’, and start to consider it as a key economic driver.

“The Treasury, BEIS and Department for Education have got to understand the huge potential of the creative industries,” said Stowell. “The risk is that we start falling behind. Other countries have rallied more quickly than we have post-pandemic and we can’t afford to slip further.”

According to the study, the UK ranked as the fifth biggest global exporter of services in 2020, contributing $57bn to the $1tn market, behind Germany ($75bn) and China ($59bn).

Stowell called for the government to broaden the definition of R&D for tax relief to enable it to be accessed by more creative businesses, abandon plans to relax IP rules and introduce a cross-government focus on skills shortages.

“International competitors are championing their creative industries and seizing the opportunities of new technology but in the UK we’re seeing muddled policies, barriers to success, and indifference to the sector’s potential,” said Stowell. “We acknowledge the government has introduced important programmes in recent years, but we are concerned past success has bred complacency.”

Stowell also cited the issue of UK start-ups having to look abroad to secure investment rather than attracting domestic buyers which she said could be tackled by better centralised data collection.

“The government needs to make it easier for the investment community to assess and analyse some of these businesses, which can be risky, to inform their decisions. The big danger is that a lot of our creative IP gets bought up by foreign-owned companies.”

A Screenskills spokesperson added: “We have always been committed to delivering a unified, industry-led strategy that provides training and development opportunities in partnership with the UK’s world-leading screen industries for everyone, regardless of background, prior educational achievement, or career stage.”