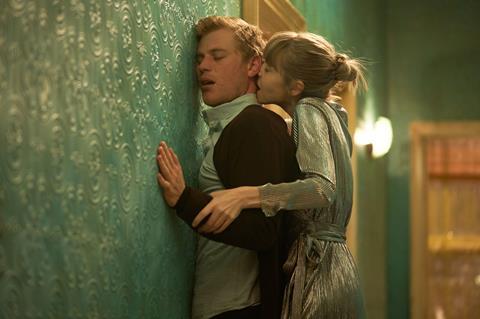 Screen can unveil a first look at the two leads in the film.

Campbell-Hughes stars as the titular Cordelia, who lives with her twin sister in their late father’s basement flat. Michael Gambon, Catherine McCormack and Joel Fry co-star in the completed film which was co-written by Campbell-Hughes with Shergold. Sally Hawkins is also an executive producer on the project. The Oscar-nominated actress was originally going to write the script with Shergold and potentially star but had to change her involvement due to scheduling.

Both Campbell-Hughes and Flynn are former Screen UK Stars of Tomorrow. Flynn most recently starred in Michael Pearce’s Beast and is set to play David Bowie in Gabriel Range’s upcoming Stardust.

Cordelia is produced by Kevin Proctor of Studio POW, who previously collaborated with Shergold on Funny Cow with Maxine Peake, which Moviehouse also represented.

Kodak and Twickenham Studios are production partners on the project.