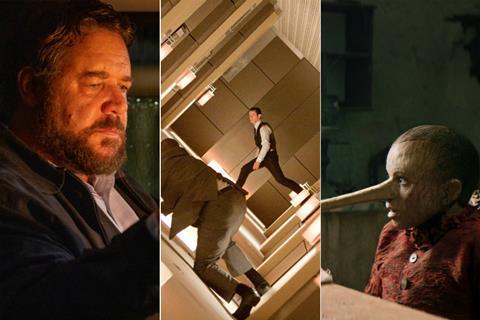 Altitude’s Russell Crowe-led thriller Unhinged topped the UK-Ireland box office for a third consecutive weekend, with a 16% increase bringing in £136,347.

The road rage thriller has now grossed £672,151 after three sessions, making it the highest-grossing new release since cinemas began reopening in the territory at the beginning of July. It will expand to over 300 locations this week, with Altitude aiming towards the £1m mark.

A 10th-anniversary re-release of Christopher Nolan’s Inception claimed second place, taking £127,000 across the three-day weekend and £203,500 including previews from a Wednesday, August 12 launch.

This is the most a back catalogue title has grossed over one weekend since cinemas reopened, suggesting there is still appetite for previously released films.

It also bodes well for Warner Bros’ release of Nolan’s Tenet on August 26 – the first blockbuster title set to hit cinemas post-lockdown. First released in 2010, Inception grossed £35.8m in the UK and Ireland, and currently sits as the 100th highest-grossing title of all-time in the territory.

The highest-grossing new title was Matteo Garrone’s Pinocchio in third, released through Vertigo Releasing. The latest adaptation of the classic story took £94,045 from 271 locations for a £347 average and has £107,260 including previews.

Disney’s Onward, first released prior to lockdown, held its top-five spot in fourth, with £90,000 – up 93% on its previous weekend performance. The Pixar animation has now grossed £6m in total from 10 weekends.

Another new title, Picturehouse Entertainment’s Babyteeth, opened in seventh place, with £38,977 from 139 locations and a £280 location average. The distributor also has Proxima, which topped up £6,816 towards a £74,188 total.