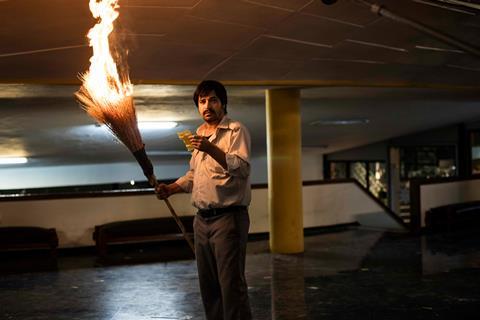 Shahram Mokri’s Iranian drama Careless Crime has been snapped up by Deaf Crocodile Films for North America, in a deal with French sales outfit Dreamlab Films.

The feature, which premiered in Venice Film Festival’s Horizons section in 2020, will receive a theatrical release in North America this autumn before heading to digital platforms.

Careless Crime is inspired by a tragedy in 1978, when four men set fire to a cinema in Iran, killing at least 420 people and triggering the Iranian Revolution. The film moves between past and present and follows arsonists intent on burning down a theatre; workers and students at the cinema; and characters within the film screening at the cinema, which may or may not all be happening at the same time.

The Persian-language feature won the Bisato d’Oro award for best original screenplay at Venice and went on to win a special jury prize at the Chicago International Film Festival.

The cast includes Babak Karimi, who appeared in Asghar Farhadi’s A Separation, The Past and The Salesman as well as in Mokri’s Fish & Cat, which premiered at Venice Horizons in 2013. Writer/director Mokri is also known for mystery crime drama Invasion, which debuted in Panorama at the Berlinale in 2018.

Deaf Crocodile is a new distributor on the US scene, which aims to bring world cinema and restorations to North American audiences and made its first acquisitions last month. It was founded by former American Cinematheque general manager, Cinelicious Pics founder Dennis Bartok and restoration specialist Craig Rogers.