Screen can reveal the first trailer for Venice Days thriller Life Guidance, Ruth Mader’s (Struggle) dystopian story about a man rebelling against a society which values capitalism and efficiency above all else. 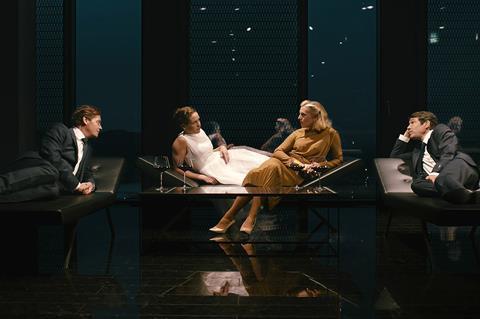 Life Guidance is set in the near future, in a world that has achieved a perfected state of capitalism. Society is sustained by a class of top achievers. These cheerfully motivated people populate a bright, friendly, transparent and efficient middle- class world.

Meanwhile, so-called minimum recipients live under sedation in the Fortresses of Sleep. The great majority of top achievers view themselves as happy and self-fulfilled. An out- sourced agency has been established for the rest: Life Guidance, which is charged with turning these individuals into optimal people as well.

Alexander is a member of the middle class and works in the financial sector. Like the others, he has internalized the system. But one wrong word to his child is enough to trigger Life Guidance. An agent from Life Guidance counsels him about attaining his optimal potential and increasingly encroaches on Alexander’s life.

When Alexander starts to rebel he soon encounters the full horror of the system.

Mader’s 2003 drama Struggle debuted in Cannes. Her second feature What Is Love opened at Berlin.