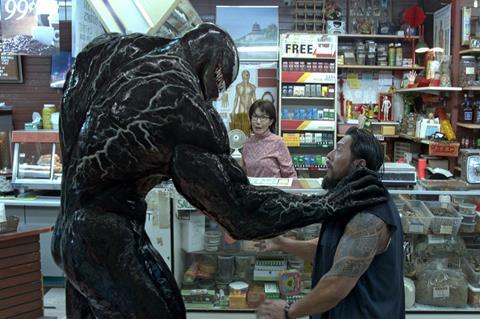 Venom, a spin-off from the Spider-man franchise taking place outside of the Marvel cinematic universe, opened to an impressive £5.6m Fri-Sun. From 557 locations, that’s a site average of £10,054. With Wednesday/Thursday previews, the total five-day opening was £8m.

Spider-Man Homecoming and Spider-Man 3 remain the joint-highest-grossing titles in the series on £30.7m, which Venom seems unlikely to reach, but the UK result, as part of the film’s wider international success, will give Sony renewed confidence in the multiple further Spider-Man spin-offs that are reportedly in development.

Johnny English Strikes Again, the third entry in the spy comedy series starring Rowan Atkinson, opened to £4.1m from 590 sites, an average of £6,949. That figure places it in the middle of the previous two entries, ahead of Johnny English’s 2003 bow of £3.4m, and behind Johnny English Reborn’s 2011 opening of £5m. The franchise record is the latter’s £20.7m.

A Star Is Born opened to a £3.1m weekend from 537 sites, an average of £5,773. With previews of £952,000, the film’s total opening is £4m. Positive reviews and early awards buzz could yet give this one some legs, as other music-themed films have shown this year (the runaway success of The Greatest Showman, for example), though word-of-mouth will be a crucial factor.

Blindspotting, Carlos López Estrada’s comedy-drama from Sundance 2018 about a man on probation, opened to £29,000 from 33 sites.

Tehran Taboo, Ali Soozandeh’s animation that premiered in Cannes Critics’ Week in 2017, opened to a three-day £8,742 from 14 sites. With previews, the film’s official opening was £11,324.