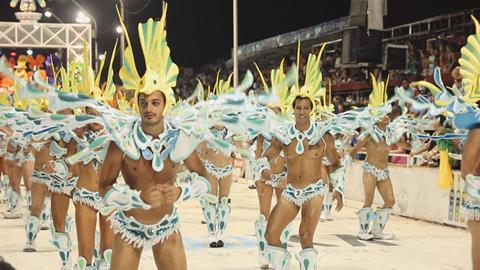 Wildstar will introduce the title to buyers at next week’s online European Film Market (EFM, March 1-5).

The film has completed production and will have a festival premiere in 2021.

It centres on two men who grew up in the town of Gualeguaychú, in the east of Argentina near the border with Uruguay. Every summer they participate in the town’s traditional carnival, which transforms the men of the community into Dionysiac figures via costumes, glitter and feathers.

Berger co-wrote the film with Martin Farina, with the pair also producers and editors on the title. Wildstar’s Murray Dibbs is an associate producer.

“Most of the carnival dancers are straight men who, once a year, allow themselves to put make-up on, wear feathered costumes, and cover their whole bodies with glitter,” said Berger. “Their behaviour was really strange to me, but it certainly attracted me.”

Former Fusion Media Sales exec Dibbs launched Wildstar in 2019, with a focus on world cinema and LGBT titles. He has previously worked with Berger on 2019’s The Blonde One, and 2020 IFFR title Young Hunter.