'You Disappear' to be made with star Scandi cast

Drama to shoot at the end of September. 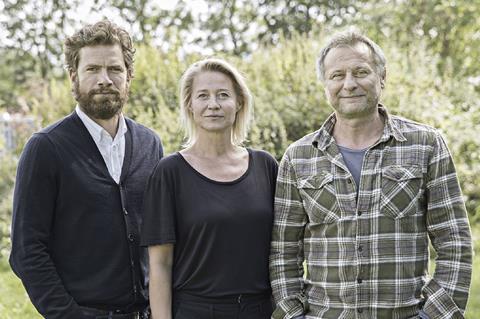 Christian Jungersen’s bestselling novel You Disappear is to be adapted for the big screen by director Peter Schønau Fog with Trine Dyrholm, Nikolaj Lie Kaas and Swedish international star Michael Nyqvist in the leading roles.

You Disappear is the first Christian Jungersen book to be adapted for the screen, following its major domestic success in 2012, when it spent more than a year on the bestseller list. The book has since been sold to numerous territories including the US, Germany, France, the Netherlands and Norway.

Shooting is set to star Sept 28 on locations in Mallorca, Denmark and Sweden.

Danish filmmaker Fog (The Art Of Crying, 2007) wrote the screenplay and will direct a cast led by Trine Dyrholm (A Royal Affair), Nikolaj Lie Kaas (The Absent One) and Michael Nyqvist (The Millennium Trilogy).

The story centres on respected schoolteacher Frederik (Kaas) is arrested and charged with fraud for millions. It appears Frederik has had a brain tumor for the last three years, which has created a change to his personality.

His wife Mia (Trine Dyrholm), assisted by solicitor Bernard (Michael Nyqvist) will have to muster all her strength to get him acquitted and try to save her family.

It will be shot by Laust Trier Mørk with production design by Gitte Malling. Producer is Louise Vesth for Zentropa with support from the Danish Film Institute, TV2 Denmark, TV4 Sweden, Den Vestdanske Filmpulje, Film Väst, the Swedish Film Institute and Nordisk Film.

Nordic distribution will be handled by Nordisk Film with expected release currently set for February 2017.