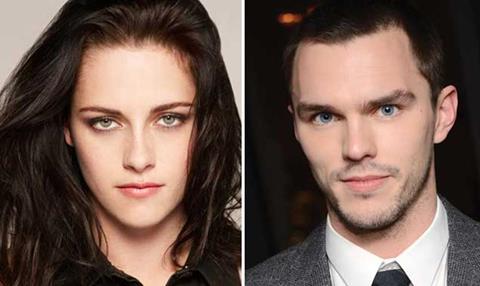 Breathe In and Like Crazy director Drake Doremus will direct screenwriter Nathan Parker’s (Moon) futuristic love story set in a society where emotions have been eradicated. Stewart and Hoult will play the film’s young couple rebelling against their society.

UTA Independent Film Group arranged financing for the project – which was previously with Exclusive Media - and will sell the North American rights to the film, which is due to start in Japan and Singapore in August.

German electro musician Apparat  - well known for track Goodbye, which featured in the climactic scene of the season 4 finale of Breaking Bad - will provide the music, production design will come from Tino Schaedler (Harry Potter And The Order Of The Phoenix), and costume design will be by Michael Wilkenson (American Hustle).

Equals tells the story of Silas (Hoult) who lives in a future society called The Collective. The inhabitants of this modern world are a new breed of humans called Equals. Equals are peaceful, calm, fair, and polite and life in The Collective is perfect; there is no greed, no poverty, no violence, and no emotion. But a new disease is threatening everyone: SOS, or Switched-On-Syndrome, is activating in its victims everything they thought they’d escaped: depression, sensitivity, fear, love but once a person is overtaken with SOS, they are sent away to The Den, and never seen again.

When Silas is infected, he becomes an outcast, but he notices one person who seems to understand what he’s going through. Nia (Stewart) has feelings, but she seems to be able to hide them. When he confronts her, they discover a connection that quickly takes over everything. They feel love and intimacy for the first time in their lives but the only way for them to insure their survival is to escape.

Combining two of the industry’s hottest sales names and a stellar production team, Equals is likely to be among the most in-demand titles at the Cannes marché.

Mister Smith CEO David Garrett told Screen: “With such a paucity of strong material in the market place, reading Equals was like a breath of fresh air. It has everything a broad audience is looking for: a compelling narrative with a beating heart. The director Drake Doremus is a real emerging talent who has brought together a fantastic cast and a really strong creative team. And the decision to shoot this in Japan and Singapore is going to give this a truly original style and voice. The enthusiastic support of UTA and Route One has been very refreshing and having Michael Schaefer and Ridley Scott as Producers is the icing on a very tasty cake”.

Hoult is repped by UTA, 42 Management and Felker Toczek, Stewart by Gersh and McKuin Frankel and Doremus, whose Like Crazy won the Grand Jury Prize at Sundance, by UTA and Morris Yorn Barnes.