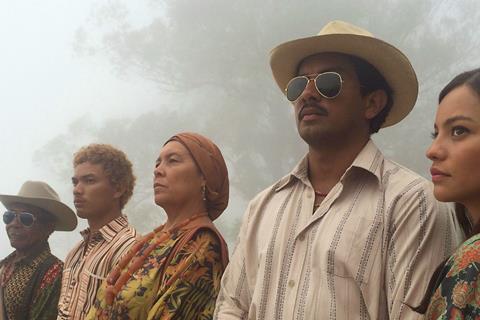 A gripping saga which traces the birth of the narcotrafficking industry which gutted Colombian society, the follow up to Embrace Of The Serpent brings a fresh perspective, rejecting the overly familiar tropes of gangster movie. By exploring the devastating effect of their marijuana export business on two clans of the indigenous Wayuu community, the film serves as an allegory for the tumultuous recent history of the country as a whole. While the film is more formally conventional than Ciro Guerra and Cristina Gallego’s Oscar-nominated arthouse hit, it represents a step up in ambition in terms of scale and scope.

Notwithstanding the bleak trajectory down which any film about blood feuds must spiral, this is an engrossing narco-thriller which deftly balances the storytelling tradition of the Wayuu with the genre conventions of the crime movie and the western .

The project is the first that Guerra and Gallego have co-directed; on their previous collaborations, Gallego held a producing credit. This factually-based screenplay originated from a story idea by Gallego. More accessible than Embrace Of The Serpent, but crafted with the same skill and bone-deep sense of cultural authenticity, Birds Of Passage should take wing on the festival circuit after opening Directors’ Fortnight at Cannes. It is also likely to figure prominently on the shopping lists of distributors specialising in high quality arthouse fare. The eye-catching blend of a crime movie with elements of something approaching magical realism should provide a seductive marketing hook.

The birds of the title have a particularly complex resonance in Colombia, being an omen which signify changing times. And over the course of five chapters or ‘songs’ – a nod to the narrative chants with which the Wayuu retell their history – which span from the late 1960s to the mid 1970s, times for the Pushaina clan of the Guajira desert lands change beyond recognition. The families move from hammocks slung in huts to luxury villas built on the foundations of drug money; where once they honoured each other with gifts of goats, subsequently crates of semi-automatic weapons become the accepted currency.

When he has accumulated sufficient livestock, Raphayet marries his Zaida, despite the reservations of her mother Ursula (Carmina Martinez, excellent), a respected elder of the Wayuu community. His contentment with their domestic life is not matched by that of his brash business buddy Moisés (Jhon Narvaez). With a wardrobe almost as loud as his car stereo, Moisés sells the seductive idea of expanding their business. But his dealings with Moisés, not a member of the Wayuu people, marks Raphayet out for suspicion within his own community. The simmering tensions between clans, held in check by a complex system of rules and diplomacy, begin to overheat once drugs and money exert their poisonous influence.

The film is particularly strong when it comes to navigating the framework of Wayuu traditions. A complex protocol system is in place; transgressions can have grave consequences. The women in the society wield immense power – their instincts, their reading of portents, form the basis of the community’s decisions.

Indigenous culture is referenced also in the exemplary score, which deftly juggles repeated drum motifs that reflect the storm clouds gathering over the scalded desert landscape. The sound design compliments the score – particularly the percussive death rattle of a swarm of locusts towards the film’s close. You don’t need to be a Wayuu seer in order to read the significance of that particular scene.