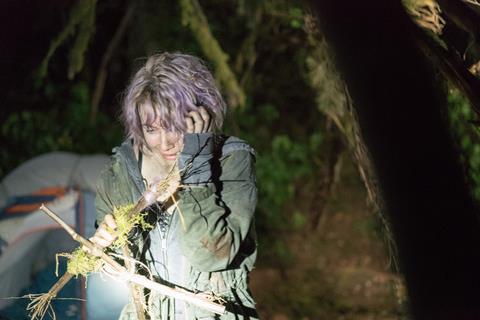 With this commissioned sequel, filmed in secret under the title The Woods, director Adam Wingard and writer Simon Barrett – who have worked together on a run of interesting genre fare (A Horrible Way to Die, You’re Next, The Guest) – are required to get the Blair Witch back in business. The Blair Witch Project – made on a shoestring by tyro filmmakers Eduardo Sanchez and Daniel Myrick – was a breakout horror hit in 1999, but franchise potential was stifled by the underperformance of Joe Berliner’s hasty Book of Shadows: Blair Witch 2 (2000).

Given that the found footage formula shows no signs of flagging after nearly two decades, the omens suggest healthy returns for Lionsgate and probably regular returns to the Burkittsville Woods

Wingard and Barrett stick as closely as possible to the structure and look of The Blair Witch Project while throwing in new characters (a bigger expedition into the woods means more victims and more squabbles), some technical advances (lightweight cameras, a drone, GPS) and glimpses of something creepy in the trees which might be the actual Blair Witch.  It’s an intense, imaginative piece of work – which treads over familiar ground but modestly ventures a bit further in the climax - and as such is likely to connect with audiences who have supported the Paranormal Activity franchise which copped its found footage angle from The Blair Witch Project in the first place.

The hook is that a video clip surfaces online which James (James Allen McCune) believes may show his sister Heather, lost in the woods since The Blair Witch Project, in the haunted house the authorities have been unable to find.  He sets out to investigate with filmmaker/not-quite-girlfriend Lisa (Callie Hernandez) documenting the expedition and friends Peter (Brandon Scott) and Ashley (Corbin Reid) along for support.  Blair Witch conspiracy geeks Lane (Wes Robinson) and Talia (Valorie Curry) agree to show James’ party where the new footage was found if they can come along – though friction soon arises between the factions.

In the woods near Burkittsville, Maryland (now played by Canadian locations which are a decent match for the originals), Wingard and Barrett make sure touchstones of the original film (the stick figures, the shifting landscape, the handprints in the abandoned house) feature, but devise new, more effects-based nastiness to deliver a few more concrete horrors than Sanchez and Myrick’s ambiguous-all-the-way approach.

Ashley cuts her foot while crossing a stream and is infected by a tendril (similar to those which feature in the horror film Splinter) while the climax takes place in a muddy tunnel under the house which Lisa has to squeeze through during a painful escape attempt (a little like the punchline of the British found footage film The Borderland).

The new cast are fine, with Robinson and Curry the most eccentric and interesting, but the scripted, conventional character interplay lacks the uneasy conviction of the improvising cast of the earlier film.  Hernandez, Reid, McCune and Scott are less distinctive, and more like typical horror movie characters than Heather Donohue, Joshua Leonard and Michael Williams were – though Hernandez and Reid do become impressively bedraggled during their ordeals.

It’s a solid job of playing safe, which extends the creepiness of the concept, and comes up with new unnerving situations – but this is very much a product picture, tailored to fans who rejected Book of Shadows while roping in new generations of horror audiences who may be aware of The Blair Witch Project only as a backlist title.

Given that the found footage formula shows no signs of flagging after nearly two decades, the omens suggest healthy returns for Lionsgate and probably regular returns to the Burkittsville Woods.  Producer Steven Schneider also has a hand in the Paranormal Activity and Insidious sagas, so series crossovers are a long-term possibility.