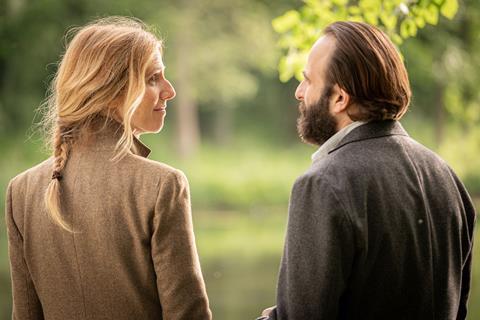 ‘Diary Of A Fleeting Affair’

Remember when all that was needed to sell tickets to a certain brand of cineaste in, say, London or New York, was the words  ’A French film about love and sex’ on the poster? Emmanuel Mouret seems to have made it his mission to revive those golden years. As French as the Tour Eiffel or the Serge Gainsbourg ballads that form part of its soundtrack, this sometimes amusing, sometimes wearing film is the latest from a writer-director who has become something of a standard bearer for the great Gallic tradition of talky extra-marital love comedies.

Too often cast as a neurotic, Kiberlain seizes with both hands not just the comedy remit but the chance to play an uncomplicatedly sex-positive modern woman

If Diary Of A Fleeting Affair brings a new idea to the table compared to Mouret’s last, the 2020 Cannes Label ensemble piece Love Affair(s), it’s in the film’s exploration of a quality that few people associate with the traditional French dating game: male insecurity. Channeling the spirit of Eric Rohmer, tossing in a dose of Woody Allen and adding a soupcon of philosopher Roland Barthes’ post-modern approach to love, this four-hander that eventually becomes a six-hander should perform well on home territory. Elsewhere, alas, French intellectual sex comedies are not quite the arthouse slam-dunks they once were. Today’s audiences may find Diary just a little too subtitle-heavy and smugly wrapped up in its white, Parisian bourgeois world.

It’s refreshing that Mouret spends no time stressing about the ethics of extra-marital affairs. Libertinage seems to be a fascination of his – in its original, 18th-century form, it was the theme of his 2019 costume film Mademoiselle de Joncquières. But Vincent Macaigne’s nervous, married man Simon (Vincent Macaigne) is about as far from a traditional libertine as you can get. When he first meets free romantic spirit Charlotte (Sandrine Kiberlain) in a Parisian bar, some days after they kissed at a party, he’s not even sure what he wants. She is: a sexual relationship that can also be about talk and companionship and visits to museums. But it needs to come with no ties, no pressure, and no expectation that it will last.

It’s telling that when they meet in the bar, Charlotte already knows everything about Simon’s wife and two kids (he blurted it all out at the party), whereas it’s only when he goes back to her apartment that he discovers she has a pre-teen son, and only later that she reveals she also has another grown-up son and daughter. Stretching over a whole spring season, divided into chapters captioned with the date of the meeting we’re about to witness, their affair is as much a question of gentle verbal testing and sparring as it is of the sex we never actually see (chastely risqué, Diary is all about the before and the after).

Too often cast as a neurotic, Kiberlain seizes with both hands not just the comedy remit but the chance to play an uncomplicatedly sex-positive modern woman who is fully in control of her life, while Macaigne is a perfect foil. Physically, Simon is the teddy-bear to Charlotte’s angular poise; character-wise, he talks himself nervously into corners as she looks at him with puzzled affection. Set over the course of one spring in Paris, the film is shot and staged as breezily as a mid-70s Claude Lelouch divertissement – in one rural idyll scene, there’s even a hint of soft-focus. Piano trills – courtesy, mostly, of Mozart – keep the tone light and wistful.