‘I Don’t Want To Be Dust’: Cairo Review 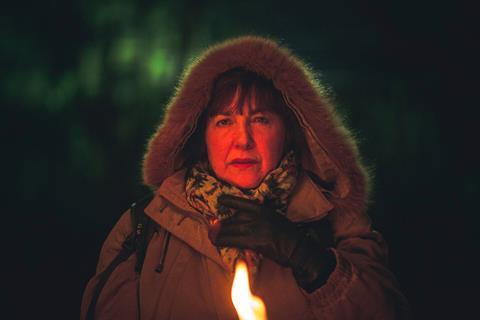 Ivan Lowenberg’s unusual film, his second feature, stars his mother Bego Sainz and is based on personal recollections of growing up in a new age-y environment when doomsday scenarios started to do the rounds. Shot in Mexico in a peachy Academy ratio, this is the story of an older woman battling the indifference of her family, specifically, and society at large, who enthusiastically embraces the prospect of the apocalypse – in fact, the coming of the end of days gives her life some purpose.

For a concept picture that lasts a brief 85 minutes, it does have a lingering effect

It’s a small, sometimes awkward film which may labour the point at times, but I Don’t Want To Be Dust, with its equally homespun title, has some interesting points to make and can be oddly soothing as Begonia, or Bego (Bego Sainz), glides towards what she hopes could be a three-day oblivion. It may struggle to assert itself after a Cairo Film Festival launch but, like Bego herself, Lowenberg’s feature is a low-budget oddity which might merit a second look.

Bego (Sainz is awkward in her first screen role, yet interesting to watch as a rare representation of an older female lead) is clearly a lonely person whom life is passing by. She’s certainly comfortable financially, but is routinely ignored by her husband, who seems to be having an affair, and her self-interested, complaining adult student son. She takes respite in relentless attempts at self-improvement. Running is hard work for the rather sedentary Bego, and it’s much easier to spend time at a local new age centre, meditating, listening to a psychic and being told she’s a spiritual chameleon before dropping wads of cash in the crystal-laden gift shop on candles, incense and self-help books.

Bego is no fool, and she seems pretty clear-eyed about it all, even when Richard (J.C. Montes-Roldan), a medium who once worked at Nasa, is introduced to the centre. He has terrible news. The Earth is about to enter another dimension (‘through a photon belt’’) which will result in three days of darkness. Yes, the lights will go out, the world will stop working; helpfully, he has a date: the ninth of September. For some reason, given she’s been a fussily frumpy yet sharp presence in the film to date, Bego embraces this with full enthusiasm. Even when Richard and the centre’s assorted healers are dragged off by the police, Bego prepares herself and her family for the apocalypse.

The prospect has a galvanising effect on Lowenberg’s lead character, who comes alive with the prospect of imminent death. She tells everyone she can, including at an excruciating family gathering with her husband standing mutely by. She exercises, she looks at the animals in a local zoo silently: either identifying with them or fearing for their future. Soon, though, they start to behave strangely…

Lowenberg’s camera is sun-bleached in its boxy format, with the sky a main focus point, highlighting Begonia’s slow reactions. The film is slim, and clearly low budget – it shot during lockdown, which is referenced by mask-wearing. The screenplay is admittedly slight. But some of the director’s observations are astute. For a concept picture that lasts a brief 85 minutes, it does have a lingering effect, with the imagery far more memorable than might have been initially apparent.