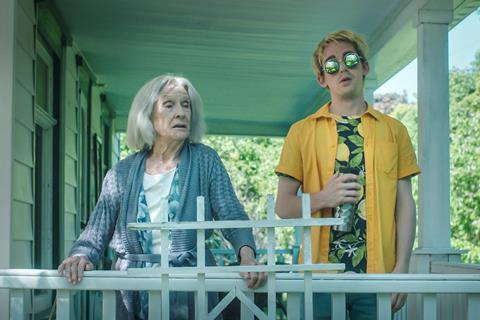 The late Cloris Leachman remains an inveterate scene stealer in Jump, Darling, a small-scale drama that provides her with a touching swansong. Phil Connell’s compact tale of a young drag queen’s emotional travails finds its heart in the chemistry between Leachman and co-star Thomas Duplessie. LGBTQ festivals should provide some traction for a modest tale that will feel at home on domestic screens.

Every time she appears, Leachman adds an extra zing to the proceedings

Writer/director Connell wastes little time in scene-setting, instead propelling us into the world of aspiring actor Russell (Duplessie) who has found a second wind and a potential new career as Toronto drag queen Fishy Falters.

His commitment to drag provokes a parting of the ways with wealthy, status conscious boyfriend Justin (Andrew Bushell). After a disastrous appearance at Peckers night club, Russell decides to leave town and take temporary sanctuary with his elderly grandmother Margaret (Leachman) in Prince Edward County.

Margaret is all too aware of her frailties and forgetfulness but remains determined to avoid becoming a resident at the local Millbrook Care Home. Russell’s arrival could be the solution to her problem.

Jump, Darling travels along predictable roads as family secrets are revealed, ghosts of the past confronted and separate generations discover the strength to be true to themselves. What makes the journey worthwhile are the performances. Leachman completed two further films before her death earlier this year aged 94. This is her last starring role. She is physically frail but delivers a sardonic one-liner with impeccable comic timing and brings out the poignancy in a spirited, frightened woman whose final wish is to have a good death in her own home. Every time she appears, Leachman adds an extra zing to the proceedings and it feels as if the film belongs to Margaret.

Russell may be trying to figure out his future but there feels less at stake for his character as he dallies with elusive bartender Zacahry (Kwaku Adu-Poku) and brings his drag persona to brighten up local bar Hannah’s Hovel.

Duplessie makes a convincing drag artiste. There is some of the relish of Tim Curry’s Frank n Furter in his Fishy Falters and Connell captures his committed lip-synching performances with dynamic camerawork and sharp editing. The film also features appearances from real life Toronto drag acts Tynomi Banks, Fay Slift and Miss Fiercalicious.

Cinematographer Viktor Cahoj conveys the charms of this wine country corner of rural Canada that are compiled into attractive montages. It is a promising first feature but the characters surrounding Russell are thinly drawn, especially Justin and Zachary. Russell’s exasperated mother Ene (Linda Kash) seems to exist merely to chide and then reconcile.

Connell’s need to keep the narrative forever moving forward comes at a cost. Jump, Darling has a trim running time but a little more complexity or contemplation would have been welcome. The lack of depth in the supporting characters is more apparent when the focus returns to the emotional plight of Margaret in her final days which feels very real and very moving.