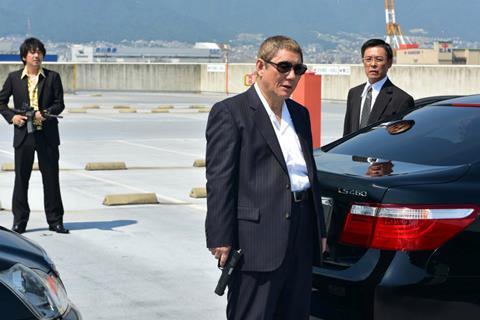 It’s business as usual – ‘business’ in the corporate crime sense – in Outrage Coda, the closer of a trilogy that began with Outrage in 2010, followed by Outrage Beyond in 2012. This ruthlessly austere yakuza triptych marks a return to basics for director-star Takeshi Kitano, aka Beat Takeshi.

The drama is propelled by tension-and-release dynamics

His broad crime comedy Ryuzo and His Seven Henchmen (2015) was clunky but a success in Japan, so Outrage Coda isn’t a case of Kitano playing to form for commercial reasons. It simply shows him honing his crime movie craft in a way that consolidates his mastery of a minimalist style that surely makes him the Jean-Pierre Melville of Asian cinema. While it (perhaps deliberately) brings nothing radically new to the table, looking and feeling very much like the last two episodes, Outrage Coda will be catnip to Kitano followers in Japan and on the festival circuit.

Once again, this chapter has a head-spinningly labyrinthine plot that involves – as per the title of a film by yazuka movie master Kinji Fukasaku – ‘battles without honour and humanity’. Perhaps there’s even less of either in Kitano’s vision, since he’s depicting a 21st century world of organised crime so efficiently soulless that he could almost be depicting the workings of the banking business.

Gone is the volatile Mafia-like culture, to be replaced by boardroom meetings in which cold-blooded elderly men in business suits bark instructions at underlings. Not surprisingly, Kitano the storyteller has a lot of time for those figures, however reprehensible, who break the mould – notably, loose-cannon hood Hanada (Pierre Taki), and his own character, former gang boss Otomo, who has survived the clan wars of Outrage Beyond and now enjoys full lone-wolf status.

The film begins on Jeju Island, South Korea, where Otomo now runs vice operations for Mr Chang (Tokio Kaneda), a Korean boss with immense power in Japan. The incident that blows up a precarious calm is an encounter with Hanada, a boorish visitor with S&M tastes, who’s just roughed up two of Otomo’s prostitutes and has the nerve to complain about the standard of hospitality in Jeju.

Hanada is a member of the Hanabishi mob, now unchallenged after the downfall of the rival Sanno organisation. But with unpopular non-yazuka businessman Nomura (Ren Ohsugi) heading the Hanabishi, there’s plenty of opportunity for his two deputies – Nishi (a juicily malevolent Toshiyuki Nishida) and Nakata (Sansei Shiomi) – to jockey for power. What they haven’t reckoned on, however, is the return of Otomo, on a mission and as taciturnly unreadable as ever.

The narrative intricacy is daunting but, for viewers willing to keep track, the pleasure lies in the way that Kitano tracks the moves as they advance to an inexorably logical climax. The drama is propelled by tension-and-release dynamics, with outbreaks of violence punctuating long stretches in which action is deferred and talk takes over, often in claustrophobic, visually flat boardroom settings. There’s even a moment at which a possible finger-chopping is considered, but dismissed.

When the slaughter does erupt, however, it’s with lightning abruptness and fearsome intensity – as in a slow-motion mass slaughter at a mobster’s homecoming party. But however stylised the violence, it’s taken seriously, and if at all played for laughs, then only of a dark, mirthless variety. Notably, while gun-induced bloodletting is shown graphically, other forms of violence –  notably a beheading by car – are treated indirectly, almost with delicacy.

Many viewers may balk at the fact that the film, taking its genre logic to an uncomfortable extreme, is an entirely male affair, with women relegated to walk-on prostitute roles. But Kitano does cast brilliantly in his selection of utterly unlikeable males. Standing out are Taki as the brutish Hanada, Nishida as the gloating conniver Nishino, and Tokio Kaneda as Chang, whose fancy waistcoats and old-school hairstyle make him look like a cattle baron in a 70s Western.

As for Beat Takeshi, he walks through it all with icy calm and characteristic sailor-like gait, right through to Otomo’s typically laconic exit. Keiichi Suzuki’s elliptical score, mixing electronics and jazz horns and sometimes almost subliminally placed in the sound mix, adds an unsettling edge.