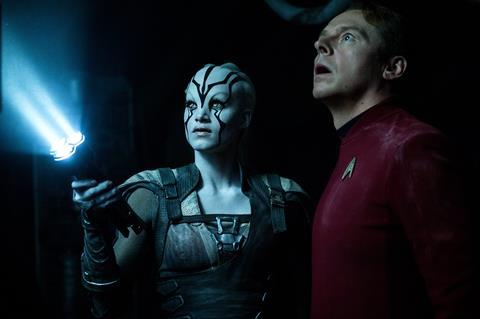 With a new director - The Fast And The Furious franchise maestro Justin Lin - and new writers at the helm, the third instalment of the re-booted Star Trek franchise gets safely through its voyage, offering a strong returning cast and a familiar, if slightly tweaked mix of effects-heavy space action, cheeky humour and philosophical musing. The mix itself may not be fresh enough to bring many new fans to cinemas, but the casting of Idris Elba as this episode’s brooding villain might help the franchise broaden its audience slightly this time out.

Hidden behind prosthetic makeup and recognisable only by his voice, Elba doesn’t get a very meaty role and feels underused as the embittered, vengeful Krall

Arriving in the US, the UK and several other major markets for the weekend of July 22, Star Trek Beyond will face fanboy- and fangirl-oriented competition from Ghostbusters and Suicide Squad as it tries to match the franchise-best $467m worldwide gross of 2013’s Star Trek Into Darkness.

Cast member Simon Pegg, up to now known for writing only comedies, co-authored the script with Doug Jung. But once the jokey opening (which recalls the classic TV show’s famous Tribbles episode) is out of the way there’s no particular emphasis on humour. If anything, this episode feels more focused on action than most of the 11 previous Star Trek films.

The episode begins in the middle of the five-year mission that started at the end of the last film, with Captain Kirk (Chris Pine) thinking about taking a land job and Spock (Zachary Quinto), having just heard of the death of ‘Spock Prime’ (whose portrayer Leonard Nimoy died before Beyond started shooting), considering quitting Starfleet and breaking up with his romantic interest Uhura (Zoë Saldana).

Mission fatigue gets forgotten, though, when a distress call takes the Enterprise to an alien planet and into the midst of a furious attack from Krall (Elba), a reptile-like alien who has it in for the Federation and its peace-keeping ways.

With the Enterprise destroyed, the crew ends up at various points on the rocky planet’s surface. Spock and Bones (Karl Urban) form an odd-couple partnership that lets the film riff on their ill-matched personalities while Scotty (Pegg) teams up with ship-wrecked alien Jaylah (Sofia Boutella, from Kingsman: The Secret Service). Kirk and Chekov (Anton Yelchin, whose untimely death came a month before the film’s release) start working on a plan to rescue the rest of the crew before they fall victim to Krall.

Taking over the directing chair from reboot mastermind J J Abrams, Lin delivers some exciting space battle action staged against spectacular digitally-enhanced sets. With the original Spock absent, though, there’s less of the philosophising that has always distinguished Star Trek. And even when the themes of loyalty and unity, and the ever evolving relationship between Kirk and Spock, come into the story, they’re not weaved in quite as convincingly as they were in the two previous reboot episodes by writers Alex Kurtzman and Roberto Orci.

Hidden behind prosthetic makeup and recognisable only by his voice, Elba doesn’t get a very meaty role and feels underused as the embittered, vengeful Krall.

The big reveal showing Enterprise helmsman Sulu (John Cho) to be gay – a move that has earned criticism from LGBT activist George Takai, the original TV series’ Sulu – turns out to be an anti-climax. In fact, it’s so subtle that much of the audience will probably miss it entirely.