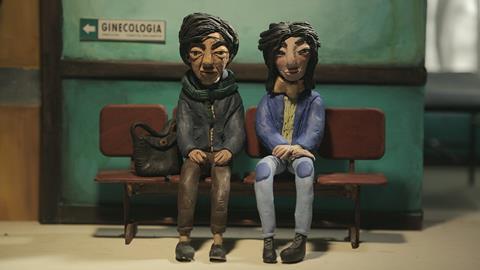 The opening titles inform us that Argentinian feature Vicenta is a documentary, but Darío Doria’s film is a more complex and ingenious creation than that suggests. Covering an important human rights case involving a young woman’s right to abortion, the film is really an illustrated account of the story, using Plasticene models but not animating them in the traditional manner. Spare, even minimalist methods make for an economically, urgently conveyed narrative. Screening in DOK Leipzig, this concise film should make a mark at festivals and niche platforms, especially where women’s issues, disability and human rights are key themes.

A complex and ingenious creation

Doría – whose previous, more conventionally executed documentaries include Elsa And Her Dancers (2011) and Salud Rural (2014) – here concentrates on an Argentinian mother who took her daughter’s plight to the UN Human Rights Commission in 2011. Working-class Vicenta, who is unable to read or write, lives in Guernica in the province of Buenos Aires with her daughter Laura. Aged 19 at the start of the narrative, Laura has learning difficulties. One day it emerges that she is 14 weeks pregnant having been raped by her uncle Luis. Helped by older daughter Valeria, Vicenta brings a case against Luis and investigates the possibility of Laura obtaining an abortion – and in so doing, enters a labyrinth of bureaucracy that involves her and her daughters constantly shuttling by train between their home and the neighbouring city of La Plata.

When, at last, the abortion seems about to happen, a judge halts the process. With time running out, Laura’s plight is aired on TV, sparking both pro-choice and anti-abortion demonstrations. Eventually, three women emerge as key allies for the family, leading to the case being taken to the UN.

The story is told through Plasticene models, created – like the sets – by Mariana Ardanaz, and they are highly evocative, even though they never move. The character models, with their roughly crafted facial features, remain immobile and impassive, but this works very effectively to create a certain essential distancing of the facts, as well as evoking the emotional enclosure of Laura, often seen staring impassively at her TV. Ardanaz’s designs also cleverly play roughness against precision: while objects like cups and toothbrushes are essentially symbolic blobs of clay, locations such as administrative offices, together with the signs in them, are reproduced in painstaking detail.

Instead of moving the character models, Doria (who shot and edited the film) creates dynamism through other means: shifting light (notably suggesting the movement of the trains), the use of different textures and materials (what seems to be real gas flame and real steam in a kitchen scene) and poised camera movement, notably with the camera tracking through the eerily deserted corridors of the offices where the family’s case appears to be chronically deadlocked. There are also archive TV and video images cleverly framed in the screens of model televisions – and a final clip in which we see the real-life Vicenta Avendaño speaking at a 2014 news conference about the outcome of the case.

Throughout the film, the essential narrative information, along with certain psychological and poetic insights, are provided by a voice-over (Liliana Herrero) in the second person, which can be interpreted as Vincenta’s internal monologue, as she muses on her situation (“Coming and going, coming and going,” is her refrain on her endless journeys, “once and a thousand times more”).

Dorio’s approach in this film is perhaps closest to Rihty Panh’s 2013 documentary The Missing Picture, which used simple models to evoke the trauma of Cambodia’s Pol Pot years. In Vicenta’s case, the execution is somewhat distancing, and makes the facts at once more immediate while holding back the emotional charge that might otherwise eclipse them. The only moments at which the film runs the risk of pathos is when Ezequiel Menalled’s sombre, pared-down string score accompanies shots of the characters gazing glumly into space.

Incidentally, this absolutely serious, elegantly achieved film should not be confused with the 2010 Spanish animation short Vicenta, which uses Plasticene techniques to broad comic effect.