A closer look at the 2016 Oscar Best Picture nominees, including reactions, reviews, and in-depth features. 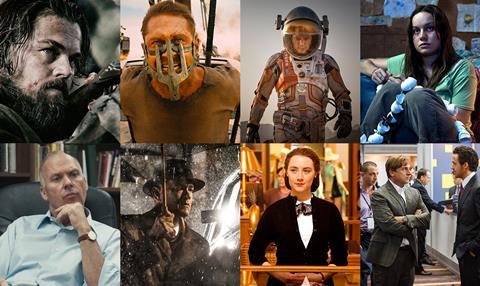 Synopsis: Based on the 2010 Michael Lewis nonfiction book, this film chronicles the few individuals who predicted the 2008 US housing market crash- and decided to make a profit off it.

Screen Review: “There are very few heroes in this film, and even the ostensibly good guys are deeply complicated” [Full Review]

Synopsis: James B. Donovan is a Brooklyn insurance claims lawyer, formerly an OSS counsel and assistant prosecutor at Nuremberg. Donovan is pressed into negotiating the first East-West spy exchange in the newly divided Berlin of 1962 and risks some unauthorised political brinkmanship to achieve his ends.

Screen Review: “Unusually for a Spielberg movie, Bridge of Spies is tonally uncertain, to the  extent that its box-office may suffer” [Full Review]

Synopsis: Eilis Lacey is a young Irish woman who aims for a better life by moving to New York in 1952 and finding a job as a department-store assistant. When she’s called back to Ireland following a death in the family, she has to choose between her new life in America, including a blossoming romance, and a chance to stay in Ireland and imagine a future with the dependable boy back home.

Screen Review: “Brooklyn is refreshing in one respect: So few migrant tales focus on a female experience.” [Full Review]

Synopsis: Max Rockatansk lives in a post-apocalyptic world and is tormented by brief, vivid flashbacks of past atrocities which he failed to prevent. Captured by lawless desert raiders called War Boys, Max is carted off to an outpost known as the Citadel, where his uninfected blood will be harvested as fuel for the War Boys, who do the bidding of their merciless, masked ruler, Immortan Joe.

Synopsis: In the near future, plucky astronaut Watney is injured and left stranded on Mars. He uses his ingenuity to stay alive and sustain alife on the Red Planet.

Synopsis: Set in the 1820s around the untamed Rocky Mountains of the American West, Glass is a scout hired by an expedition of hunters. This tale of survival and revenge is inspired by true events and based on Michael Punke’s 2002 novel.

Screen Review: “Awe-inspiring visuals are offset by the frequent barbarism of The Revenant’s characters.” [Full Review]

Synopsis: Jack is a five-year-old who lives happily in a small shed with his mother. Unbeknownst to Jack, it soon becomes apparent that they are actually being held captive by a man who kidnapped Jack’s mother seven years ago and has been sexually assaulting her ever since.

Synopsis: Based on real events, this procedural drama chronicles how, in 2001, a handful of Boston Globe reporters exposed a widespread cover-up of sexual abuse in the Catholic Church.