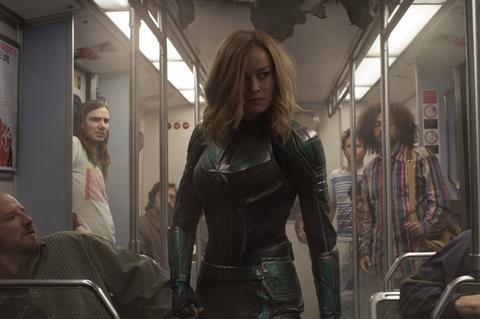 MARCH 15 UPDATE: Captain Marvel will surge towards $750m worldwide this weekend after Disney executives reported the Brie Larson tentpole hit $575.5m through the end of Thursday (14).

The 21st entry in Marvel Studios’ $18bn-plus hit factory shot out of the gates last weekend in a $456.7m global launch, although executives are tempering expectations, given the tendency for considerable second-weekend box office drops for blockbusters of this size.

Best picture Oscar winner Green Book is on a roll after its Academy Awards triumph (when it also won for original screenplay, and supporting actor Mahershala Ali) and surged to $162.5m last weekend through Lionsgate and Amblin Partners. Currently on approximately $244m worldwide, the road movie with Viggo Mortensen and Ali appears to plenty left in the tank given last weekend’s $28.1m international haul and a $200m-plus final international tally is not out of the question.

Family film The Kid Who Would Be King on $10.6m opens in Russia and Spain, while The Hate U Give debuts in Italy, and German romance Trautmann arrives in Germany.

From Universal Pictures International, DreamWorks Animation’s How To Train Your Dragon: The Hidden World stands at $321.2m, and horror release Happy Death Day 2U $34.9m.

From Sony Pictures Releasing International, the horror film Escape Room on $77.7m opens in Spain and South Korea, while family title A Dog’s Way Home on $34.8m opens in Italy. Oscar-winning animation Spider-Man: Into The Spider-Verse has grossed $179.5m.

Comedy remake What Men Want starring Taraji. P. Henson has grossed an early $7.7m and opens in the UK through Paramount Pictures International, as well as Germany, Netherlands, Austria and Panama. Rose Byrne and Mark Wahlberg comedy Instant Family stands at $50.2m and arrives in Poland.

Family animation Wonder Park gets a decent push day-and-date with North America this weekend and will open in Brazil, Indonesia, India, Philippines, Thailand, Middle East, Singapore, South Africa, and others.