OCTOBER 17 UPDATE: Seven years after Angels & Demons, the Tom Hanks and Ron Howard reunion delivered an estimated $50m from 53 markets via Sony ahead of the October 28 North American release. 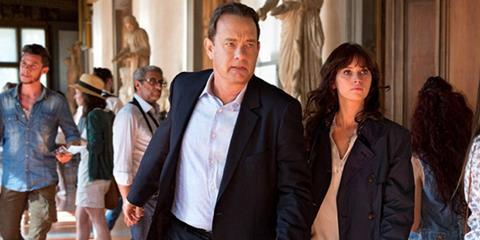 Inferno ventured into its first markets in style, ranking number one in 45 led by $5m in Italy following the world premiere in Florence.

The action film, again starring Hanks as the globe-trotting academic Robert Langdon who gets pulled into another mystery, delivered $4.4m in Germany and Russia, $3.8m in the UK, $2m in Spain and $1.2m in the Netherlands.

The Middle East produced $1.8m total as the UAE accounted from $1.1m from 80 screens.

Inferno delivered the second biggest October opening for an IMAX film on $2.6m from 239 screens.

Number one North American release The Accountant debuted day-and-date in ten mostly Asian markets on $3.2m from 1,323 screens led by a debut in Taiwan of $772k from 101.

South Korea delivered $355k from 380 and Hong Kong $329k from 45 screens for number one. This week brings debuts in Germany, Brazil and Spain.

UPDATE: DreamWorks Pictures’ The Girl On The Train added $9.1m from 29 territories as the thriller climbed to $33.2m.

Universal territories generated $521k from seven for an additional $2.2m and executives reported that Colombia stands at $430k after two weekends.

On Wednesday the film became the highest grossing Working Title release in the Netherlands, where it stands at $8.1m and has usurped the 17-year-old record of Notting Hill. The film opens this week in German-speaking Switzerland and Indonesia.

Illumination Entertainment and Universal’s The Secret Life Of Pets used a $6m haul from 46 territories to climb to $492.5m. It added $3.2m in the second session in Italy for $9.7m and ranks second behind Inferno.

J.A. Bayona’s A Monster Calls stayed top in the director’s native Spain for the second weekend, adding $3.9m for $12.5m. The fantasy drama scored the biggest Wednesday gross of all time in Spain last week.

Andrea Arnold’s American Honey debuted in the UK on $212k from 96 cinemas. Universal holds rights in 12 territories and the early tally including Germany and German-speaking Switzerland is $329k from 194 venues.