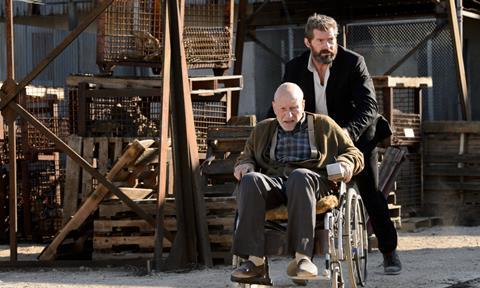 The X-Men spin-ventured into 82 markets over the weekend day-and-date with the $88.4m number one North American opening, powered by a $48.8m launch in China. The UK followed on $11.8m, while Brazil delivered $8.9m and South Korea $8.1m.

Logan marks Hugh Jackman’s final outing as Wolverine and also the final appearance by Patrick Stewart as Charles Xavier, was in fine fettle everywhere and opened to pin most markets.

Assassin’s Creed tracked down $1.9m during its weekend opening in Japan, bringing the Michael Fassbender starrer to $183.8m internationally following a $2.5m haul from seven.

A Cure For Wellness brought in another $1.2m from 29 markets. The international total for the horror film stands at $11.7m with 11 market releases still to come.

UPDATED: Resident Evil: The Final Chapter pulled in $17.2m from 43 markets to bring the running total to $256.6m internationally.

Constantin Film’s local partner Leomus Pictures distributes in China, where the horror-thriller added $16.8m in the second weekend for $137.9m.

Illumination and Universal’s Sing grossed $12m from 62 for $298.2m. Universal executives expect the animation will cross $300m at the international box office in the next few days. Sing opened in Russia at number two on $6.6m, while it placed number five in its third week in China on $1.8m for $27.4m. The last territory for the animated musical is Japan on March 17.

There are seven territories still to release: Bolivia, Chile, Russia and Ukraine on Mar. 16. Brazil and Ecuador open on March 23 and Japan on May 12.

UPDATED: La La Land capitalised on its six Oscars last weekend to generated $11.4m from 77 markets, and climb to $251.1m internationally and $396.8m worldwide. The Ryan Gosling and Emma Stone musical continued to charm audiences in Japan where it has taken $13.9m after two sessions.

John Wick: Chapter 2 earned a further $5.6m from 79 markets. The international total stands at $61.5m and worldwide $144.5m. The action sequel has generated more than the predecessor did in most of its markets, or is on track to do so.

Top is the UK on $6.8m after three weeks. Germany follows closely behind on $6.1m. In their fourth week of release, Russia stands at $6m, the Middle East $4.9m, and Taiwan $2.7m. Italy will be the next major release on March 16.

Rings grossed $2.1m in 44 markets as the horror reboot climbed $51.4m. There are no new openings this weekend. The film’s next major release will be Italy on March 16.