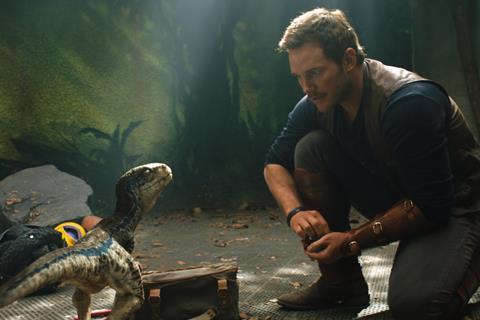 Jurassic World: Fallen Kingdom stayed top of the UK box office for the fifth weekend. The film dropped a fairly slim 34% with £1.3m, taking it to £36.8m to date.

Considering the challenges, that’s a pretty good opening for the film, measuring up to the UK openings of the previous three entries: The Purge (£1m), The Purge: Anarchy (£1.2m); and The Purge: Election Year (£807,803). Respectively, those films ended on £3.4m, £4.6m and £2.3m, meaning The First Purge should comfortably slot into the £2-3m range.

This weekend, the film was one of only two new entries in the UK Top 10 (the other being Picturehouse’s event cinema release of Beatles Yellow Submarine in tenth).

The Greatest Showman has now been on release in the UK for 28 weeks and is up to £46.9m.

A one-day eventised re-release of Beatles movie Yellow Submarine, marking the film’s 50th anniversary, took an impressive £163,155 from 72 locations for a hefty £2,235 screen average. The film will play on general release from Friday and a sing-a-long version is set for August 3rd.

That eclipses Nick Broomfield’s Whitney Houston biopic Whitney “Can I be Me”, which opened to £94,613 in June 2016, though in less than half the number of sites.

Altitude previously released music biopic Amy, which started with £523,192 and ended on £3.8m. A recent theatrical music documentary compariosn would be Grace Jones: Bloodlight And Bami, which opened with £96,621 in the UK in October 2017.

Oliver Parker’s synchronised swimming comedy Swimming With Men, starring Rob Brydon, which premiered at the Edinburgh International Film Festival earlier this month, opened in the UK with a soft £59,301 from 136 sites for an average of £436. With previews, the film is up to £70,736 in its UK run so far.

Mary Shelley, Haifaa Al-Mansour’s biopic of the 19th century England novelist starring Elle Fanning, opened in the UK with a soft £16,562 from 36 locations, an average of £460.