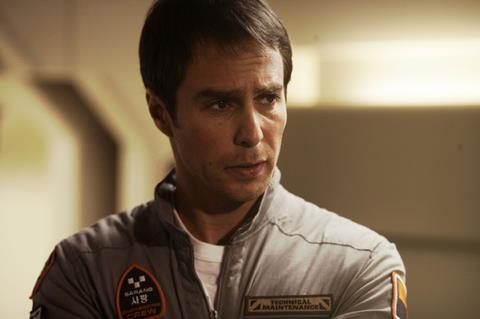 A conceptually fascinating exploration on identity, Duncan Jones’ Moon is a frequently engrossing science fiction story given a particular tension and seriousness by its moral inquiry into what it means to be fully human and alive.

The first feature of Jones, well-regarded for his inventive advertising work, rock videos and short films, Moon synthesizes film history by riffing on classics such as 2001: A Space Odyssey, Alien and Blade Runner. Rather than simply poach on the iconography of these films, Jones finds his own vernacular, working with writer Nathan Parker, to subvert expectations and draw out a fare more ambiguous and complicated moral study.

The Liberty Films production debuted in the premiere section at Sundance. Sony acquired rights in English-language markets and is seeking distribution rights in those territories. The film’s a natural for upscale science fiction fans with its interesting graphic design and special visual effects. It is also accessible enough to cross over to urban mainstream markets and it should also perform well in ancillary platforms as well.

Adding another layered turn to his gallery of oddballs and outcasts, Sam Rockwell is brilliant playing Sam Bell, an astronaut nearing the conclusion of his three-year contract working for an international energy conglomerate. He’s the lone human assigned on a lunar mining plant stripping raw energy sources for human consumption.

He lives in an intricately designed space station, where his model building and horticulture help compensate for his extreme isolation. His only human connection exist in his satellite communiques with his wife (McElligott). Bell’s only direct interaction is with Gerty (voiced by Spacey), the computer that safeguards his mission.

Rockwell turns the second half into a tour-de-force that echoes the work of Jeremy Irons in David Cronenberg’s Dead Ringer. His physical resourceful, especially during a fight between his two halves, offers a electrifying performance that moves between strength and weakness, disruption and fear.

As the coolly dispassionate computer voice, Spacey’s objective intonation obviously echo that of the self-annihilating computer HAL in Stanley Kubrick’s masterpiece. If there’s a weakness to Parker’s script, the story sacrifices logic to fit the dramatic requirements of the plot and it leaves several intriguing story points dangling.

That is consistent with the movie’s contrarian nature. Moon was shot entirely on soundstages at Shepperton Studios (like Ridley Scott’s Alien). Visually, the movie’s moody and sinuous without ever feeling claustrophobic. Gary Smith’s cinematography and Clint Mansell’s music are convincingly eerie and sinister.