As part of Screen’s Perspectives on 2020 series, Bafta chair and UK producer Krishnendu Majumdar tells us how kickboxing on Zoom is helping him through an exhaustive review of the British Academy, which he is balancing with a return to shooting. 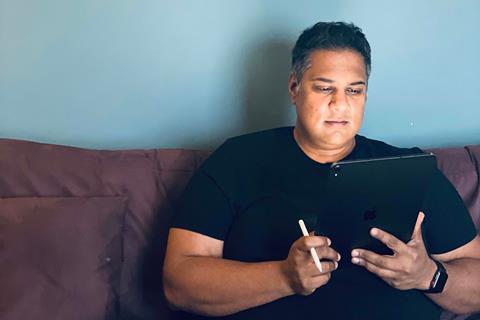 UK producer Krishnendu Majumdar is the first person of colour to chair the British Academy of Film and Television Arts (Bafta). He took up the role in June after one year as deputy chair.

Working with a group that included CEO Amanda Berry, film committee chair Marc Samuelson and director of awards and membership Emma Baehr, Majumdar immediately became the figurehead of an unprecedented deep-dive examination of Bafta’s voting procedures and membership, with the aim of ensuring the Academy was a fit standard-bearer for the screen industries it champions.

Majumdar runs film and TV production outfit Me + You Productions with Richard Yee. When lockdown lifted, they shot two films in the second series of Dominic Savage’s female-led anthology series I Am for Channel 4, starring Suranne Jones and Letitia Wright respectively. A third will shoot in January.

What is your most memorable moment of the year?
The day in September we announced the [Bafta] review. There were many late nights, literally hundreds of hours of meetings. There was so much rigour and debate. It coincided with the end of filming on Letitia Wright’s I Am film. We’d had a minor Covid-19 scare, and it was such a relief we had got through it safely.

How have you adapted your routine to stay sane and productive?
I go to see an osteopath and an acupuncturist. I’ve also started kickboxing training three times a week on Zoom at home. I used to do boxing at a local studio but now I have an online trainer. Three times a week at 7am we do an hour of weights and different things on the yoga mat in the front room.

How do you combine being chair of Bafta with your day job?
It’s really difficult. But the pandemic has changed the way we work. I’m fitting in many more meetings. Yesterday I was on a Zoom with LA until about 11pm. When we did the review, we met over 400 people and I chaired the majority of those meetings. I could have only done that because it was all on Zoom. But as a consequence, you’ve got real fatigue. Being Bafta chair is more than a job — it is a tremendous privilege and honour and a big responsibility. But you’ve got to pick and choose, because everyone wants a piece of your time.

When did you realise that the Bafta review needed to be so far-reaching?
On the morning of the [nominations for the] film awards. We all agreed, Amanda [Berry], Emma [Baehr], Marc [Samuelson], all of us. The thing that took over was the pandemic, and then the horrific killing of George Floyd and the huge wave of anti-racist protests. It’s a seismic cultural shift in society that touches every industry, including film, video games, TV, all of the creative industries.

A moment like this comes rarely, where you think the world is changing and turning on its axis. We’ve got to rise to it. And I feel the industry is rising to it. You need a more diverse range of voices. You can’t just have the same people who went to the same universities [running the industry].

I am someone who is a person of colour. My dad came here [to the UK] on a boat from India in the 1960s and had to retrain to be a doctor. I grew up in Wales. Growing up, I didn’t know anyone who worked in the industry, I was never the likeliest candidate for this role.

What will success look like to you, regarding the review and the 2021 film awards?
It’s an odd year. With the pandemic, films have been paused, films have been pushed into 2021, 2022. I think we will need to look at the results over two to three years.

What excites you about the future of the industry?
I feel tangible, sustainable change is coming. There are huge challenges ahead of us, not least that we’ve not been able to go to the cinema recently. Just before lockdown I went to see Mogul Mowgli and Rocks with my wife. I laughed, I cried. It was such a great experience to see it in the cinema — that kind of joyous experience, the communion you have with the silver screen in a darkened room with other people there.