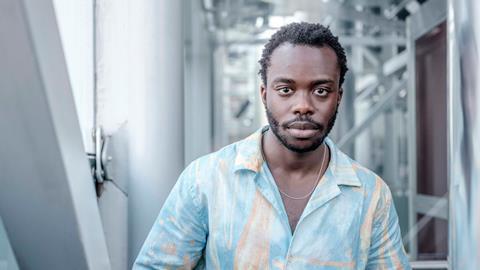 When London Academy of Music and Dramatic Art (Lamda) student Jonathan Ajayi was cast in the lead role of the school’s production of Roy Williams’ Sucker Punch, he was asked if he would like to perform with or without an interval. “The character doesn’t leave the stage once, and the director said, ‘Listen, this is a taxing role,’” recalls Ajayi. But conscious that talent agents might leave at an interval, the west Londoner opted to perform without interruption.

Ajayi felt deflated after the first public performance, especially when his phone did not ring, but it paved the way for his first professional role: Tarell Alvin McCraney’s The Brothers Size at London’s Young Vic. “This character also didn’t leave the stage,” explains Ajayi, whose co-stars included Sope Dirisu and Anthony Welsh. There was one snag: the actor was still at Lamda. He was able to persuade the college to release him — and says he surprised even himself with his performance, ultimately clinching representation from Markham Froggatt & Irwin.

Next up was being cast in Ben Bond’s indie drama The Drifters — and more begging to Lamda to gain a second exit permission. Two more pieces of good news came through during this shoot: Ajayi had landed roles as the chief antagonist in BBC series Noughts + Crosses and a supporting part in Warner Bros and DC Films’ Wonder Woman 1984.

Since graduating in 2018, Ajayi has returned to the stage for a National Theatre production of Anton Chekhov’s Three Sisters and his current gig, playing Laertes in Greg Hersov’s Hamlet for the Young Vic. He also shot the second season of Noughts + Crosses this summer.

But it is short film Play It Safe that might end up winning the actor further attention. Written and directed by Mitch Kalisa and tackling racism in a visceral, uncomfortable way, it showcases a high-wire performance from Ajayi and won grand jury and audience awards at this year’s SXSW. “It’s one of the rare moments since becoming an actor that I feel like I really expressed myself,” he says. “It is one of my proudest moments.”