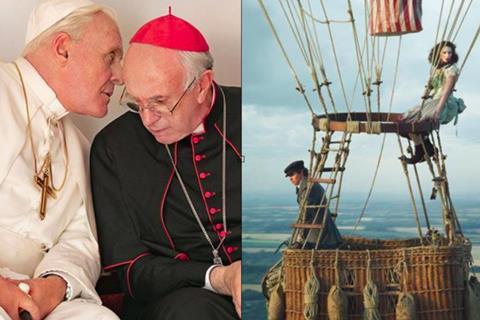 The Two Popes / The Aeronauts

AFI FEST top brass have rounded out the galas line-up with the addition of Netflix’s The Two Popes and The Aeronauts from Amazon Studios.

The Two Popes will screen on November 18 and stars Jonathan Pryce as Pope Francis and Anthony Hopkins as Pope Benedict XVI. Fernando Meirelles directed the story about a series of conversations that took place between the two men in and around the Vatican in late 2012 and 2013.

Benedict, who would announce his shock resignation from the Papacy in February 2013, summoned Argentina’s Cardinal Jorge Bergoglio – who would later succeed him as Pope Francis – to Rome to discuss the future of the Catholic Church.

The Two Popes premiered at Telluride and played in Toronto. It will receive a theatrical launch orchestrated by Netflix on November 27 before it debuts on the platform on December 20.

The Aeronauts stars Felicity Jones and Eddie Redmayne as 19th century daredevil hot air balloon pilot Amelia Wren and pioneering meteorologist James Glaisher as they attempt to fly higher than anyone in history. Tom Harper directed the film, which also debuted at Telluride before playing Toronto. Amazon Studios will release it theatrically in the US On December 6 ahead of its debut on Prime Video on December 20.

The late producer and director Alan J. Pakula will be the subject of a tribute with a screening of Matthew Miele’s documentary Alan Pakula: Going For The Truth, as well as screenings of Pakula’s Klute, Sophie’s Choice, and The Sterile Cuckoo.