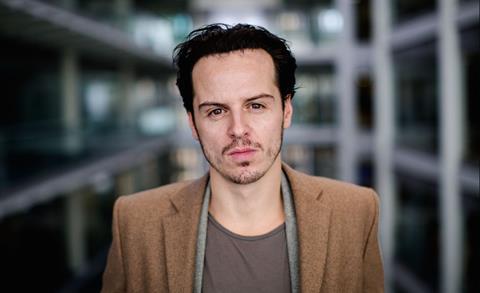 Andrew Scott, known for his villainous roles in Sherlock and Spectre, is to lead the cast of Steel Country, a crime thriller that begins shooting in the US later this week.

Bankside Films has come on board to sell the US-set thriller, written by Brendan Higgins and directed by Simon Fellows (Malice In Wonderland), ahead of the Toronto International Film Festival.

Scott will play a small town truck driver who turns detective when a young boy is found dead in a sleepy part of Western Pennsylvania. His investigations turn into an obsession to prove the boy has been murdered, leading to harrowing consequences.

The BAFTA-winner will co-star alongside Bronagh Waugh, who starred in TV crime series The Fall, and Denise Gough (’71, Jimmy’s Hall), who recently won an Olivier Best Actress award for her performance in stage play People, Places And Things.

Principal photography begins on location in Georgia this Friday (Aug 26).

Executive producers for Motion Picture Capital are Laure Vaysse and Jo Monk.  Lee Vandermolen also serves as an exec with Vandermolen Films partnering on the early development of the project.

“It’s a whip smart script, that I am sure in Simon’s capable hands will deliver a fantastic contemporary film with a classic sheen. It’s the quality of script I’ve always dreamt of finding.”

Scott’s forthcoming credits include Denial, in which he stars alongside Rachel Weisz, Tom Wilkinson and Timothy Spall, in addition to the recently released Swallows And Amazons, an adaptation of the classic children’s novel, alongside Kelly Macdonald, Rafe Spall and Jessica Hines.