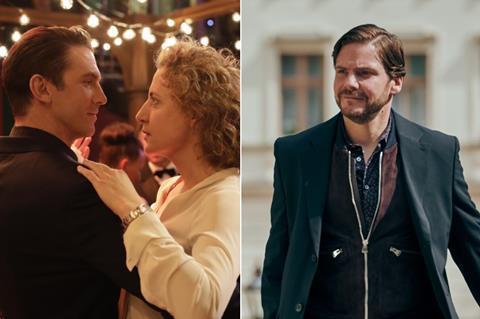 Curzon has acquired UK and Ireland rights to Maria Schrader’s romantic comedy I’m Your Man and Daniel Brühl’s dark comedy Next Door in a brace of deals with Munich-based sales agent Beta Cinema.

Both German features received their world premiere in competition at the Berlin International Film Festival in March, where Maren Eggert won the Berlinale’s first gender-neutral Silver Bear acting prize for her leading performance in I’m Your Man.

Curzon will release I’m Your Man, which also stars Dan Stevens, in cinemas and on streaming platform Curzon Home Cinema on August 13. Next Door will also receive a day-and-date release in October.

I’m Your Man tells the story of the relationship between Alma, a scientist at Berlin’s Pergamon Museum played by Eggert, and Tom, a handsome robot in human form designed to cater to her every need, played by Stevens. Written by German filmmaker Schrader and Jan Schomburg, the film is inspired by Emma Braslavsky’s short story. Producer is Lisa Blumberg for Letterbox Filmproduktion. It was released in Germany by Majestic Film Verleih on July 1, when cinemas in the country were cleared to reopen after eight months of closures.

Next Door marks the directorial debut of Brühl – who also stars alongside Peter Kurth and Vicky Krieps — and centres on a film star and his troublesome neighbour. Based on an original idea by the Spanish-German actor and exploring issues of gentrification and inequality in Berlin, the script was written by Daniel Kehlmann.

Brühl also produces with his Amusement Park Film partner Malte Grunert (Land Of Mine), with backing from the DFFF, Medienboard Berlin-Brandenburg, Creative Europe MEDIA and Warner Bros Germany, which will release the film in Germany on Thursday (July 15).

Beta Cinema previously closed a raft of sales for both titles at the European Film Market in March.