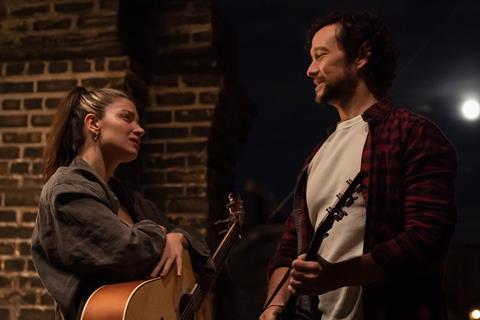 Heading into Monday evening Apple and Amazon were understood to be in hot pursuit of Sundance crowd-pleaser Flora And Son as bidding reached the high teens to low twenties range, according to sources.

John Carney’s story of a single mother who tries to get her broken family back together is shaping up to be one of the biggest Sundance deals on record. It stars Bono’s daughter Eve Hewson, Joseph Gordon-Levitt, Orén Kinlan and Jack Reynor and debuted in Premieres. WME Independent, Fifth Season and FilmNation represent sales.

By Tuesday every selection will have screened in person and sources say buyers are eager to close deals before treasures become more widely exposed to the acquisitions community once the portal goes live on Tuesday.

A worldwide streamer offer is understood to be in for Beyond Utopia, Madeleine Gavin’s highly regarded film about North Korean defectors that premiered in US Documentary Competition. There is also a worldwide offer on the table for The Eternal Memory, Maite Alberdi’s The Mole Agent follow-up about an aging Chilean couple dealing with Alzheimer’s disease. Submarine and UTA Independent Film Group jointly represent rights.

UTA Independent Film Group continues eight-figure negotiations on Andrew Durham’s US Dramatic Competition entry Fairyland, which Arclight Films represents for international. The sales agent is also fielding interest in Susanna Fogel’s Premieres entry Cat Person, which is based on Kristen Roupenian’s The New Yorker short story about a flirtation that spirals out of control; and Maryam Keshavarz’s Iranian-American family drama and US Dramatic Competition entry The Persian Version.

At time of writing Bankside had received at least two offers on Midnight hit Talk To Me from Australia’s Philippou brothers. WME Independent is in talks with buyers on William Oldroyd’s Premieres selection Eileen with Anne Hathaway and Thomasin McKenzie.